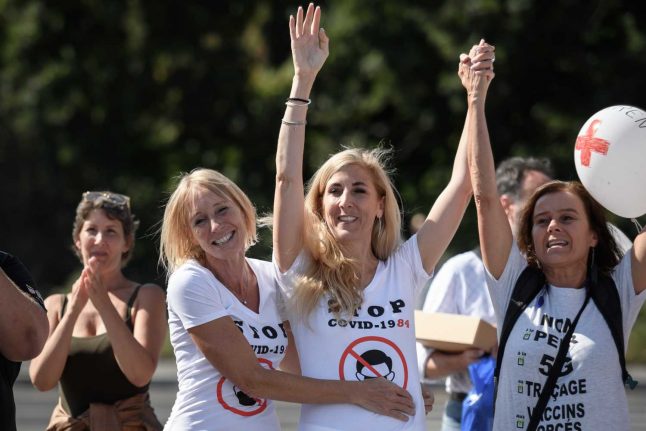 Geneva-based lawyer Renuka Cavadini and Angela Carvalho from Swiss law firm Page & Partners breaks down the consequences for failing to comply with coronavirus measures in Switzerland.

The COVID-related pandemic began to propagate again during this summer of 2020.

In an attempt to combat the risk of contamination, the Federal Council took protective measures on 6th July 2020.

One of these measures has been to make the wearing of a mask compulsory on public transport (buses, planes and trains in particular).

READ: Everything you need to know about Switzerland's nationwide mask requirement

Since the 19th October 2020, the compulsory wearing of a mask has been extended by the Federal Council to all enclosed spaces accessible to the public.

This obligation does not apply to children under the age of 12, nor to persons who may be exempted from wearing a mask for medical reasons.

What happens when a person is not wearing a face mask in one of the places mentioned above?

The above-mentioned Ordinance provides for penal administrative sanctions against any person who contravenes the protective measures i.e. a fine.

However, the only person who can be held liable under the Ordinance is the operator or organiser of events accessible to the public who intentionally violates the obligations incumbent upon him/her, more particularly the wearing of a face mask, hygiene and distance measures.

Thus, a private individual not wearing a mask on a railway platform, for example, would in theory not be liable to fines, for lack of an explicit legal basis.

However, they might be forbidden from entering a train without a mask. They would also most likely not be reimbursed for their train ticket.

If the unmasked person is allowed to enter the train, it would be the transport operator who would be fined.

The Swiss federal law to combat epidemics authorises cantonal authorities to fine individuals (a maximum of 5000 CHF in case of negligence) for not complying with the following requirements of the authorities:

a)     Not informing the cantonal doctor of their state of health and contact with third parties if they are ill, presumed ill, infected or presumed infected.

c)     When entering Switzerland and ordered to do so, refusing medical supervision, quarantine, medical examination or medical treatment.

d)     Leaving the country when you have been forbidden to do so by the authorities because you are ill or presumed ill.

If the number of infections does not decrease by 28th October 2020, the Federal Council has already announced, during its meeting on 21 October 2020, that further protective measures will be introduced, which could be accompanied by administrative penal sanctions against individuals.

READ: What to expect from the Swiss government's lockdown meeting on Wednesday

This was already the case in April this year in the French speaking part of Switzerland when hundreds of people in Geneva, Vaud and Neuchatel were fined between CHF 400 to 800 CHF per person for private gatherings in public of more than five people.

The fine is discretionary and there is no ceiling mentioned.

Since the 19th October 2020, the restriction in Geneva is of maximum five adults for any private gathering. Children under 12 are not counted but cannot exceed five.

Therefore, only gatherings of five adults and five children are permitted.