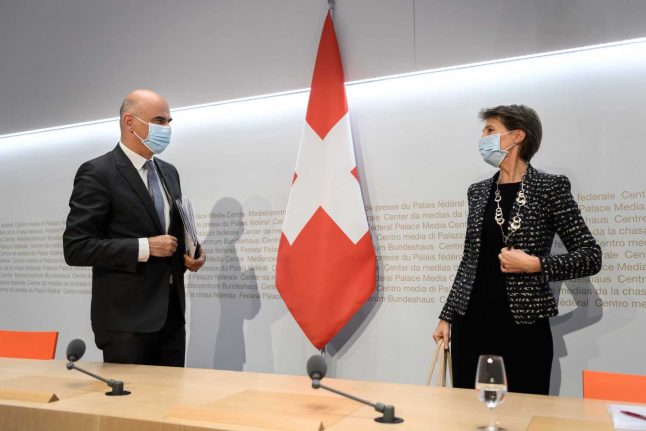 At a meeting with cantonal authorities on Wednesday, October 28th, Switzerland announced a range of new restrictions measures to halt the spread of the coronavirus.

Sommaruga explained that the measures must be implemented at a federal level. “What unites us is stronger than what divides us, we want Switzerland to overcome this crisis unanimously” she said.

The measures include expanding the rules on face masks along with putting in place strict new curfews.

As yet, no end date has been put on the measures.

Berset said the goal of the new measures was to avoid overloading the hospital system.

At the meeting, Switzerland announced a dramatic change to its quarantine requirement. Find out more here.

The new figures came from 30,772 tests – meaning there is a test positivity rate of 28 percent.

The test positivity rate is the amount of tests which produce a positive result – with a higher percentage indicating a less controlled Covid-19 spread throughout the population.

Mask requirement to be expanded

Just over a fortnight after Switzerland expanded mask rules to all publicly accessible indoor areas, the federal government expanded the rules once again.

From midnight on Thursday, October 28th, masks should be worn outdoors in all built-up urban areas where “the concentration of people does not allow the necessary distances to be respected”.

Masks would also be required in all publicly accessible indoor spaces, such as markets, waiting areas for buses and trains, etc.

Diners at restaurants are be allowed to remove their masks when sitting down to eat.

Masks are required at the workplace – including all offices – unless one cannot be worn for safety reasons.

Curfew for bars and restaurants

Restaurants and bars are forced to close from 11pm to 6am.

Guests must sit and can only eat or drink at the table. A maximum of four people can sit at each table, excluding children.

There would be a limit of 50 people for all public events.

Groups of more than 10 people are not allowed to meet under the proposed rules.

This includes all private events such as birthdays and weddings.

Clubs and discos must close, while dancing would be prohibited.

These measures will apply from November 2nd, rather than October 29th.

Indoor sports without physical contact are not allowed to have more than 15 participants, with the exception of professional sports.

Rehearsals and concerts with more than 15 people would be prohibited under the new rules.

For those with fewer than 15 people, masks must be worn. Concerts with singing – such as choirs – are completely prohibited.

What is the next step?

The government declined to put an end date on the measures, with Berset saying it was necessary to see how effective they were before considering their removal.

Berset said it was up to all residents of Switzerland to prevent a more extreme set of measures being implemented.

Berset told the press conference “The next step would have big, big consequences. This is now the last chance to prevent a lockdown.”

How do the measures compare with those from the spring?

The measures adopted are less severe than those implemented in the spring.

While groups were restricted to five, they are now allowed to be as large as 15.

Similarly, while bars and restaurants were forced to close completely, they may now remain open within a set time frame.

The major difference between the spring and autumn lockdowns however has been the mask requirement.

Masks were not made law in Switzerland until July 6th – and even then this was only on public transport.

Conversely, the current rules regarding masks are among the strictest in Europe.