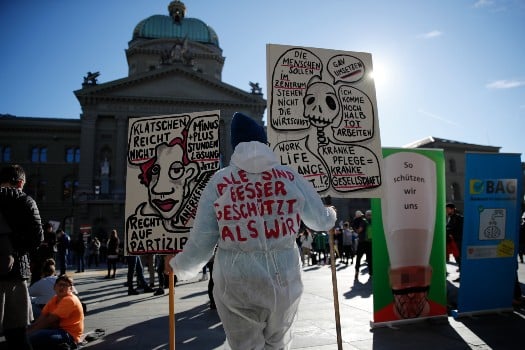 A healthcare worker wears a PPE suit reading in German "All are better protected than we are!" Photo: AFP

Around 1,000 health care professionals gathered in the Swiss capital Saturday afternoon to cap off a week of protests across the country demanding better pay and other conditions amid the pandemic.

But their authorised and peaceful protest was briefly disrupted by around 100 people taking part in an unauthorised protest against restrictions aimed at controlling the spread of Covid-19, which were tightened this week as virus cases surged in the country.

Police in riot gear coralled the anti-restriction demonstrators behind barriers to give space to the health workers, who needed to spread out on the square in front of the parliament building to maintain the recommended physical distance.

From behind the barriers, the anti-restriction protesters — many unmasked — lobbed firecrackers, shouted slogans and brandished messages against the “dictatorship”.

Switzerland is seeing one of the worst surges in Covid-19 cases in Europe, and the Swiss government this week announced a range of fresh measures, including more mask requirements, but stopped short of ordering new lockdowns.

After the unauthorised demonstrators spilled into the streets, police began rounding them up and taking down their names. Seven people were taken into custody, Bern police tweeted.

A similar demonstration was broken up in Zurich after participants largely failed to adhere to requirements to wear masks and keep physical distance, police there said.

The health workers in Bern, wearing facemasks and some in scrubs, meanwhile went ahead with their demonstration, holding up posters with messages like: “Don't leave us standing in the rain,” and “We need: more appreciation, more recovery time, less pressure and stress”.

They were demanding a Covid-19 bonus to help compensate for the massive additional workload many had faced since the start of the crisis.

They also called for better working conditions, including a call to eliminate a requirement to time the provision of all healthcare services.

“Being constantly pressed for time, we are unable to provide the care patients need,” nurse Liridona Dizdari told ATS.

“Many of us are just emotionally exhausted.”