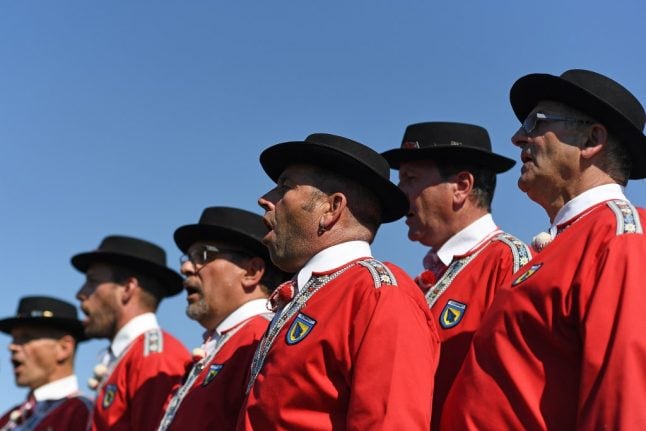 After a yodel show in Schwyz hundreds of spectators were tested positive.Photo by AFP

The number of cases in the central Swiss canton with a population of just over 159,000 rose sharply in the past few weeks due to a series of spectator events.

According to SRF public broadcaster, which based its analysis on data from the Federal Office of Public Health (FOPH), one of those ‘superspreader’ events was the yodeling show “Uf immer und Ewig”, where many of the 600 spectators became infected at the end of September because they were not required to wear a mask.

But the epidemiological situation in the canton “has calmed down” significantly, SFR analysis shows, due to restrictions introduced in the canton on October 30th.

Mass events such as the yodeling festival are now banned across Switzerland, but Schwyz went even further by limiting public gatherings to 30 instead of 50 allowed on the national level, and making masks compulsory in the workplace.

As a result of these measures, the number of cases fell from 223 the last week of October to just 21 on November 8th.

“So if major events with questionable protection concepts can cause a sharp increase in the numbers, then their absence causes falling numbers”, SRF pointed out.

READ MORE: What are the coronavirus measures in every Swiss canton?

In October and at the beginning of November, the canton had the most corona infections in relation to its population of nearly 344,000.

“The tide has turned and this has not happened by accident” , SRF said.

Social contacts were restricted three weeks ago, and since then only 10 people have been allowed to meet at the same time. Restaurants, bars, clubs, cinemas and other leisure facilities have been closed.

And while in other Catholic cantons families went to church and the cemetery on All Saints’ Day on November 1st, this was not allowed in Valais.

As a comparison, in Fribourg which, like Valais, is predominantly Catholic, the number of coronavirus infections rose after November 1st. Gatherings on All Saints’ Day were not banned in that canton, SRF said.