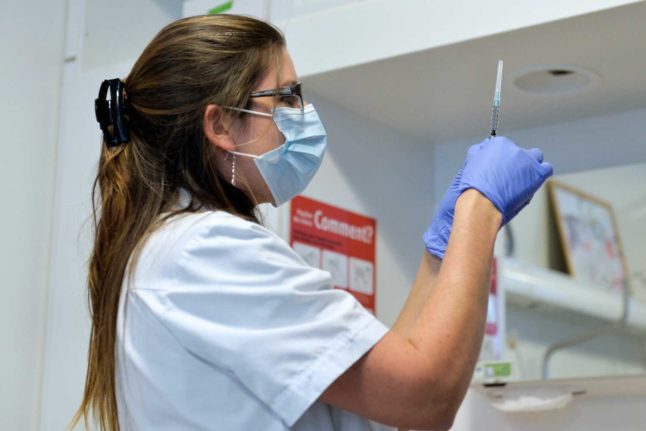 A doctor administers a vaccine in a hospital in Lausanne. Photo: Richard Juilliart / AFP

According to reports, the coronavirus vaccine is likely to be available by the spring of 2021 in Switzerland.

However, while it would appear that securing a safe and effective vaccine would be the major hurdle, the actual process of vaccination is also likely to prove difficult.

In particular, convincing vaccine sceptics is likely to be difficult.

In order to be effective, between 60 and 70 percent of the population in Switzerland needs to be vaccinated against the coronavirus.

In a country where only around 15 percent of people are vaccinated against the flu, getting to that figure poses a range of challenges.

As has been repeated frequently by the Swiss government, any coronavirus vaccine will not be made compulsory.

While Health Minister Alain Berset has frequently ruled out making the vaccine mandatory, even if the government wanted to it is unlikely such a measure would be allowed under Swiss law.

That said, there is the possibility that people in certain industries would be required to undergo a vaccination.

“If an employee refuses, then they would have to work elsewhere, in a place where they don't come in contact with people at risk,” Berset said.

He added that if the controversy arises when the vaccine becomes available, “we would hope to resolve this problem pragmatically, as we've always done in our country”.

How would this work?

Some employers could decide only to hire people who have been vaccinated – or to require their existing staff to get vaccinated.

Similarly, schools, hospitals and nursing homes may decide to only accept people who have been vaccinated, reports NZZ.

While Swiss law prevents a mandatory vaccination regime, it appears there is nothing to stop the government putting in place fines for anyone who refuses to get vaccinated.

Legal experts suggest while this would be legal, it may be politically difficult to achieve.

Instead, there is legal precedent for a law which requires people in specific industries to get vaccinated.

A Swiss court in 2006 decided that the dismissal of an employee in a hospital who refused a hepatitis B vaccine was “neither arbitrary or disproportionate” and thereby could be upheld.

Easier in private than in public

Lorenz Langer, professor of public law at the University of Zurich, told the NZZ that an obligation to vaccinate “may be justified in exceptional situations”.

Langer said that such a requirement would be easier to enforce in the public sphere rather than in the private sphere.

While employees of public hospitals and schools may be prevented from an obligation to vaccinate due to Swiss law, employees in entities which do not receive government funding could be required to vaccinate.

The Federal Supreme Court has already said that the Child and Adult Protection Authority (KESB) in each canton may decide on whether children should be vaccinated when parents refuse, although this was in the case of measles rather than coronavirus.