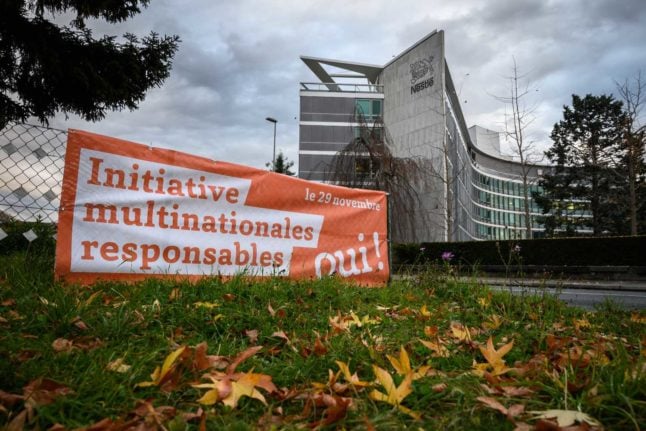 Recent polls indicate a slim majority supports an initiative to amend the Swiss constitution and force such companies to ensure they and their suppliers respect strict human rights and environmental protection standards.

READ: Everything you need to know about Switzerland's referendum to ban military exports

The initiative was launched by an alliance of 130 non-governmental organisations as part of Switzerland's system of direct democracy, and has the backing of trade unions, church groups and actors across the political spectrum.

It is opposed however by both the government and parliament, which have warned that while the intention is good, the legislation goes “too far”.

They have put forward a counter-proposal that would also require companies to report on rights, environmental protections and corruption issues — without being liable for violations.

Supporters have plastered Swiss towns and cities with posters that highlight environmental degradation and human suffering caused by Swiss companies.

One shows a picture of a mournful-looking girl in front of a Peruvian mine owned by mining giant Glencore, blamed for contaminating the local population with lead and other heavy metals.

The campaigners also underscore how pesticides long banned in Switzerland are still sold by agrochemicals giant Syngenta in developing countries, and deplore small-particle pollution spewed from a cement plant owned by LafargeHolcim in Nigeria.

These and other multinationals are important drivers of the Swiss economy, which at the end of 2018 counted close to 29,000 such corporations, accounting for more than a quarter of all jobs in the country, according to official statistics.

But while backers of Sunday's initiative acknowledge that most companies respect rights and environmental protections, they insist voluntary measures are not enough to bring the rest in line.

“It is very clearly an illusion to say that companies will do everything by themselves,” Chantal Peyer, a spokeswoman for the Responsible Business initiative, told AFP.

“There are responsible companies who respect human rights, but unscrupulous companies don't change.”

The Swiss business community, along with the government and parliament, argue that the constitutional amendments could be detrimental for all Swiss companies, not just those that behave badly.

The campaign, according to Vincent Simon of the Swiss employers' association EconomieSuisse, has “done a lot of damage overall to our economy.”

That is particularly true for the companies mentioned by name, he told AFP. Simon said: “More generally we have tarnished the reputation of our economy even though we are convinced… that Swiss companies are rather exemplary as a whole.”

Swiss businesses and employer organisations are hoping the initiative will fail, which would automatically activate the government's counter-proposal.

They have voiced particular concern over a provision that would make Swiss-based businesses liable for abuses committed by subsidiaries unless they can prove they had done required due diligence.

Companies will be presumed “guilty until proven innocent”, Nestle President Paul Bulcke warned in an interview with public broadcaster RTS.

Glencore chief Ivan Glasenberg agreed, warning in a recent interview with the Neue Zurcher Zeitung newspaper that “everyone could then come to Switzerland to have their case tried in court”, and benefit from a “reversal of the burden of proof”.

But he insisted that while Glencore “would probably have to hire more lawyers, nothing would change in the way we operate our mines.”

He also rejected the notion that passing the initiative would prompt large multinationals like Glencore to pack up and leave Switzerland.

But he warned that “companies that are active in developing countries will think twice before moving their headquarters to Switzerland.”

Jean-Daniel Pasche, the head of the Swiss Watch Industry Federation, warned that even when companies prove in court they acted in good faith, “there could be reputational damage”.

Such damage, he told AFP, is hard to repair.