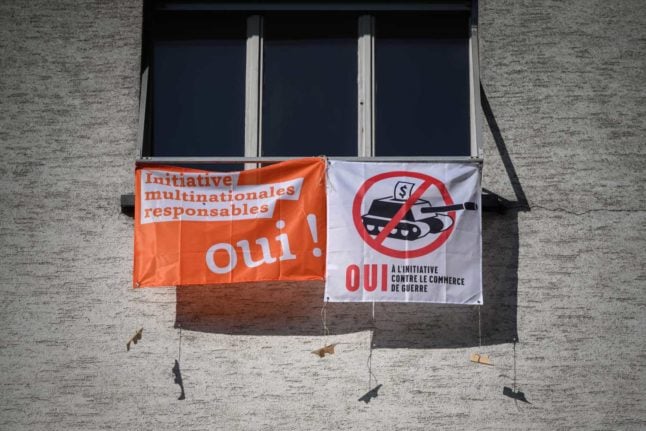 Swiss voters will decide Sunday whether to ban funding companies that make weapons and other war materials, in a move that could block billions of dollars worth of investments.

The famously neutral country, which has not been to war in centuries, already bans the production of nuclear, biological and chemical weapons, as well as landmines and cluster munitions.

But a coalition of peace groups and left-leaning parties insist that those laws do not go far enough.

They are seeking a constitutional amendment making it illegal to finance any companies that make any form of war material, including assault rifles, tanks and their components.

As part of Switzerland's system of direct democracy, their initiative will be among the issues put to a vote on Sunday.

The initiative, which is opposed by the government and parliament, appears unlikely to pass, with the latest poll showing only 41 percent of those questioned were in favour.

But it has certainly stirred up tensions in Switzerland.

It would bar the Swiss central bank and pension funds from investing in companies that make more than five percent of revenues from sales of war material.

Meanwhile the arms makers would be denied credit lines in Switzerland.

That could have a big impact.

According to a report earlier this month by research group Profundo, the central bank, large banks like UBS and Credit Suisse and other Swiss financial institutions currently have nearly $11 billion worth of loans and investments in arms companies, including BAE Systems, Lockheed Martin and Northrop.

Backers of the initiative stress that while Switzerland does not participate as a country in armed conflicts, its financial sector does, insisting that investing in arms companies is “incompatible” with Swiss neutrality.

“Swiss money kills”, reads one of the posters in favour of the initiative, featuring an origami tank made out of a 100 Swiss franc banknote.

READ: Everything you need to know about Switzerland's 'corporate responsibility' referendum

The Swiss government and parliament meanwhile insist the country's current legislation is sufficient, warning that the requested constitutional amendment “goes too far”.

The narrow definition of what constitutes a weapons company, they caution, would effectively block funding of civil aviation companies such as Boeing, Airbus and Rolls Royce.

The initiative “would not avert wars, (but) would diminish yields from social security and retirement funds,” the government has cautioned.

The initiative, it adds, also “threatens the Swiss finance sector and would weaken Swiss industry and its small- and medium-size companies.”