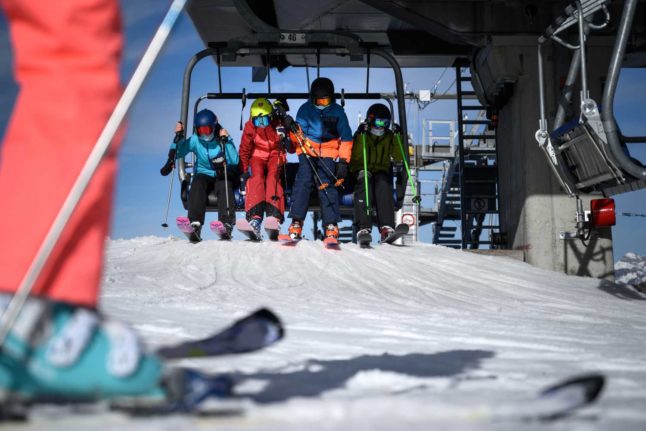 Switzerland's ski slopes are open and will most likely stay that way. Image: AFP

France, Italy and Germany are leading a European Union effort to close ski slopes until mid January at the earliest.

Switzerland however is going its own way. With ski slopes already open across the country – and more still to follow.

He added, though, that the government would re-examine the situation before the Christmas holidays, because even though decisions on what parts of the economy should shut down are generally left to the Swiss cantons, or states, the federal government can step in if it deems the situation unsafe.

Markus Berger from Switzerland Tourism criticised the efforts to close ski resorts, saying he was confident that the Swiss had the right approach.

“In Switzerland, the Federal Council, the authorities and the tourism industry are convinced that the Swiss way is right – for the moment – and that the winter season can take place safely,” Berger told DPA.

– IN PICTURES: Swiss hit the slopes 'to save ski season'

– Is it safe to ski in the Swiss Alps this season?

– Can Switzerland still save its ski season?

Berger questioned whether efforts at a European level to stop skiing would be effective, particularly with neighbouring Austria – unlike Switzerland an EU member – also being resistant.

“The idea of a Europe-wide coordinated season opening of the winter sport destinations was informally discussed in the Alpine countries as early as late summer and was not pursued for being unsuitable,” said Berger.

“We therefore assume that this approach (to stop skiing until January) will no longer be successful either,” Berger said.

Merkel piste-off about plans to ski over Christmas

“I will say this openly that it won't be easy, but we will try (to close ski resorts until January),” Chancellor Angela Merkel said on Thursday.

While urging Germans to stay at home over the year's end festive season, the states and federal government agreed to “work at the European side, to not allow ski tourism until January 10”.

Although Germany cannot stop Switzerland from skiing, it may act to prevent Germans from heading south for the winter – which could have serious impacts for Switzerland.

Almost eight million guests came to Switzerland for the ski season in 2018-19 – the last season unaffected by the pandemic – with approximately ten percent coming from Germany.

For now, Bern is opting to trust people to respect the protection measures put in place by chairlift operators and ski schools, including facemask requirements everywhere except on the slopes.

“In Switzerland, the government, the authorities and the tourism industry are all convinced that the Swiss way is for now the right one, and that the winter season can go ahead safely,” Veronique Kanel, spokeswoman for the national tourism office, told AFP.

Monday's launch of the winter ski season received backing from President Simonetta Sommaruga, who said she was “counting on the population to help us ensure this is a successful winter.”

Swiss authorities have hailed stringent measures put in place by the operators of Switzerland's more than 2,400 ski-lift installations, which include button lifts, t-bars, chairlifts, and cable cars. Implementation has meanwhile not always been smooth.

A picture of skiers packed together as they queued for a lift in Zermatt earlier this month sparked outrage, and police have been asked to intervene on several occasions.

For weeks now, the Swiss have been invited to hit the slopes at resorts like Verbier, Gstaad and Saas-Fee.

“We'll ski at Christmas,” Christophe Darbellay, the regional government chief in the southwestern canton of Wallis, insisted to AFP.

The region, which counts some of Switzerland's biggest ski resorts, has already opened its hotels back up after a brief shutdown and restaurants are due to be back in business in mid-December.

Closure 'not an option'

“More than ever, people need fresh air, snow, space,” Darbellay said, voicing disbelief at the decision in neighbouring France to shut ski lifts, but not the metros in Paris.

In Valais, shutting down the resorts “is not an option,” he said.

If Switzerland does become the only country with open slopes in the Alps, its resorts could see some ardent ski enthusiasts from across Europe show up, but they are not bracing for a massive influx of foreign tourists.

“We do not expect to have huge numbers of Europeans on the Swiss slopes, given the travel and movement restrictions in place in European countries,” Kanel said, pointing out that Germany for instance considered Switzerland a high-risk zone.

And even with the resorts open, the outlook for Switzerland's ski and tourism sector remains dim.

A study conducted by Switzerland Tourism in October showed that accommodation reservations in the mountains over the Christmas holiday were 19 percent lower than last year, while ski holiday bookings had shrunk 28 percent.

Floriane Moerch, the spokeswoman for an association of some 350 Swiss ski-lift operating companies, told AFP the industry was deeply concerned about what lies ahead.

“A ski-lift shutdown would be very difficult.”