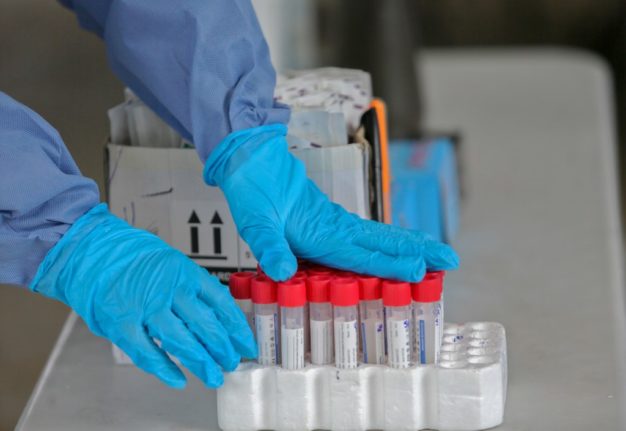 Home tests will be sent to a laboratory in Zürich.Photo by AFP

The COVID-19 RNA PCR is sold by Home Sampling company in St. Gallen.

The firm describes this test on its website as “a simple, safe and painless method”.

Unlike conventional nasal or throat swabs, the new test requires spitting into a kind of funnel straw. The only condition is to refrain from drinking, eating or smoking during the half hour preceding the test.

The saliva sample is then sent to a laboratory in Zürich, where it is examined using molecular biological analysis.

The result is delivered the same day by email.

READ MORE: 'We have enough tests': Switzerland calls on Swiss to get tested

This test has been certified by the Swiss Agency for Therapeutic Product (Swissmedic).

Its quality was checked by the Invenimus laboratory in Kloten (ZH), which compared samples from 250 people who were tested through the nasal and throat smear, as well as the saliva sample. Each time, the results matched, confirming the new test’s reliability.

And studies from Stanford and Washington Universities in the United States showed that the accuracy of at-home saliva tests is comparable to samples taken by medical personnel.

The reliability of the test is also found to be comparable, if not better, to that of a smear from the nose and throat, Yale University researchers found.

Home Sampling’s spokesperson told RTS public broadcaster that the in-home saliva test “was made possible thanks to Canadian researchers who developed a preservation liquid that guarantees high sample stability”.

The test, which can be ordered online directly from the manufacturer, costs 157 francs.

No medical prescription is needed, but if you have one, you will only have to cover the usual co-pay.

Switzerland currently uses two types of nasal-swab tests: the PCR, which generally yields the result within 24 to 48 hours, and rapid antigen tests, showing results in 15 to 20 minutes.