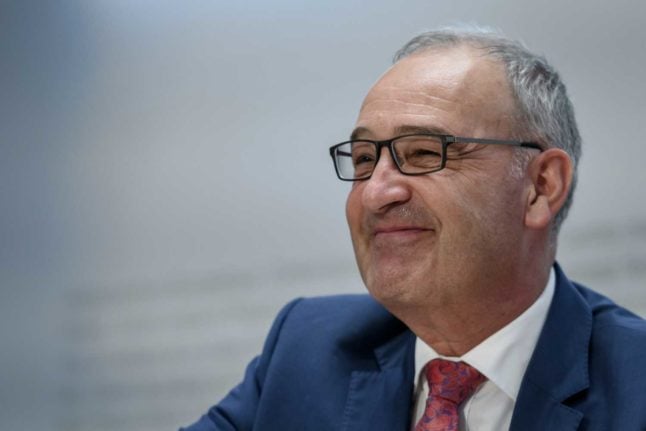 Parmelin, from the right-wing Swiss People’s Party, has served as Economics Minister for the past two years.

Under Switzerland’s unique presidential system, presidents are not directly elected by the public but are instead voted into office by the Federal Assembly.

Presidents in Switzerland serve one-year terms and must be a member of the seven-person Federal Council in order to be elected to the top job.

Parmelin will take over from current President Simonetta Sommaruga in 2021.

While Parmelin is known as the ‘nice guy’ of Swiss politics, there were some concerns in the lead up to the vote about his limited English skills.

As reported in Swiss media outlet 20 Minutes, some were concerned that Parmelin’s limited English “could become embarrassing for Switzerland internationally”.

The Local Switzerland reported in 2018 that Parmelin’s lack of English had been seen as problematic across the Swiss political spectrum.

Parmelin has been a member of the Federal Council since 2015 and has not previously served as President.

Parmelin, 61, will be charged with heading up Switzerland's response to the coronavirus crisis, with cases in the wealthy Alpine nation remaining stubbornly high despite restrictions aimed at controlling the spread of the pandemic.

“I fully appreciate the weight of the responsibilities incumbent on me as president of the confederation, particularly in the current health and economic context,” he tweeted.

“I am committed to taking them on with commitment and conviction.” Switzerland rotates the presidency annually among the Federal Council, the seven-member cabinet that serves as the country's collective head of state and government.

The president of the Swiss Confederation is first among equals, chairs the council and typically represents the country in major matters internally and abroad.

Parmelin will keep his brief as the economy minister when he takes over as president from the outgoing Simonetta Sommaruga.

Parmelin has been the vice-president this year and by convention therefore takes over the top job.

Foreign Minister Ignazio Cassis was elected vice-president with 162 out of 191 valid votes.

The 59-year-old liberal is therefore set to become president in 2022. – Background in the vineyards – A winegrower by trade, Parmelin is from Vaud, the French-speaking western canton surrounding Lausanne on the shores of Lake Geneva.

He is from the right-wing populist Swiss People's Party (SVP), which is the largest in the National Council, the 200-seat lower house of parliament.

Rather than a being a spectacular orator, Parmelin has a more simplistic and pragmatic style.

His swift reaction in the early stages of the pandemic won plaudits, but the shine wore off as the crisis dragged on.

Parmelin served in the Vaud cantonal legislature from 1994 to 2003, when he was elected to the National Council. He joined the Federal Council government in 2016 as the defence, civil protection and sports minister.

Parmelin is the first SVP Federal Council member from French-speaking Switzerland and rarely speaks in German, which limited his appeal in most of the country.

He switched to the economy brief in January this year and became the vice-president as well.

Besides the pandemic, Parmelin will also have to head up potentially tricky negotiations with the surrounding European Union.