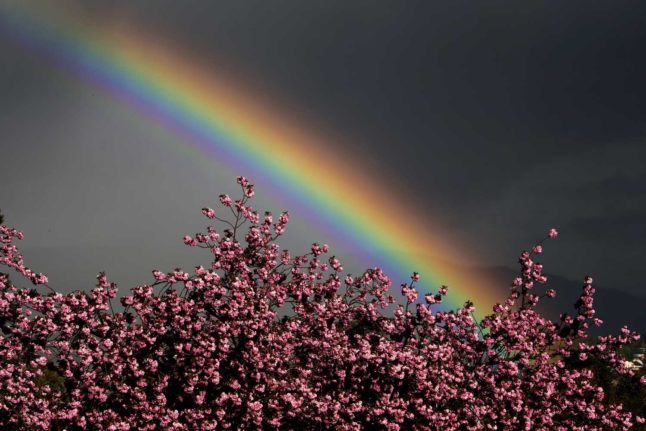 A rainbow over the city of Geneva. Photo: FABRICE COFFRINI / AFP

Switzerland's parliament on Wednesday ironed out a few remaining wrinkles in a bill to allow same-sex couples to marry in a country lagging behind much of Europe on gay rights.

Agreement on the wording of the bill paves the way for gays and lesbians to marry and for lesbians to access sperm donations, although it is likely to go to a popular vote before being turned into law.

Switzerland is one of few European countries where same-sex marriage is not legal.

The country allows same-sex couples to enter into “registered partnerships”, but this does not provide the same rights as marriage, including for obtaining citizenship and the joint adoption of children.

“It is about time that we put an end to institutional discrimination, and provide the same rights to everyone,” Nicolas Walder, an MP with the Greens, told the house, according to the ATS news agency.

Parliamentarians have been debating the new bill since 2013, with multiple rounds of back and forth between the two houses.

One of the sticking points finally agreed on Wednesday was that lesbians should have access to sperm donations, despite continued opposition from the right.

The Senate had also discussed at length the insistence by right-wing parties that passing the bill would require a constitutional amendment, which automatically requires a referendum.

But parliamentarians in the end agreed that a simple law change was possible, without changing the constitution.

While the bill will not automatically go to a referendum, the Christian, ultra-conservative Federal Democratic Union party has already said it plans to call for a popular vote against it.

Switzerland's direct democratic system allows for any issues that garners enough signatures to be put to the people.