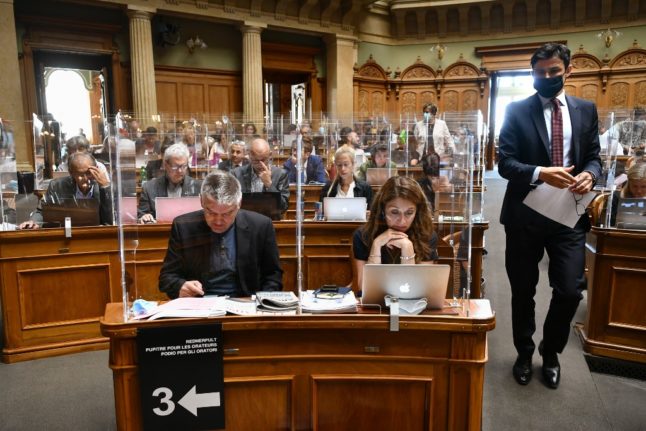 The Parliament has not unanimously backed federal Covid measures. Photo by AFP

In a press conference this week, Health Minister Alain Berset said that “in November, the situation was more positive and hopeful, leading us to believe that we could cut the number of daily cases to between 600 and 800 by Christmas”.

However, this has not happened, and the number of reported daily infections has ranged between 4,000 and 5,000 in the past several days.

This increase could lead to further, stricter national measures.

Swiss experts say this spike in numbers is due to a combination of factors, including the way in which the health crisis has been managed by the authorities. While the cantons of the French-speaking Switzerland had implemented a slew of restrictions to curb the contaminations — including the closure of restaurants, bars, as well as entertainment and sports venues — everyday life in the Swiss-German part continued for the most part as through there were no pandemic.

“German-speaking cantons made a mistake by not responding swiftly and decisively when the numbers started to go up again”, Alexander Trechsel, Professor of Political Science at the University of Lucerne, said in an interview.

READ MORE: What are the new Covid-19 hotspots in Switzerland right now?

“If the cantonal politicians had reacted quickly at the time, we would not need such drastic measures now”, he noted.

Christoph Zenger, director of Center for Health Law and Health Care Management at Bern University, pointed out in the same interview that “if individual cantons deal too loosely with the pandemic, they endanger the whole of Switzerland.”

The Federal Council failed in leadership

“A more centralised management would have been necessary, instead of the chaos of measures” enacted by the cantons, Trechsel said.

He also pointed out that the decision-making process at the federal level has not been without glitches during the pandemic.

The principle of collegiality that the seven-member Federal Council is known for “was under great strain in this crisis”, Trechsel said.

Differences of opinion within the government contributed to the fact that “the Federal Council mostly acted reactively rather than proactively”, he added.

“Now consistent measures at the federal level are needed again. It is probably time to return to the state of emergency”.

Parliament has not supported federal restrictions

Trechsler pointed out that many deputies did not back, but rather opposed, the measures mandated by government.

“Of course, parliamentarians have the right to express their opinion and discuss the rules, but they must also support the necessary measures”, he said.

Zenger said that disagreements among experts are also partly to blame for the current situation.

“The contradicting opinions of various specialists are confusing to the public”, he said.

“It would be helpful if the discussions were first conducted among themselves and not in public forums”.

Didier Pitter, head of the infection control unit at Geneva University Hospitals (HUG) told RTS public broadcaster that most contaminations happen within families or among friends — that is to say, in close-knit groups of people.

“People may respect all the protection measures when they are out and about, but once they are with family members or friends, they let down their guard”.