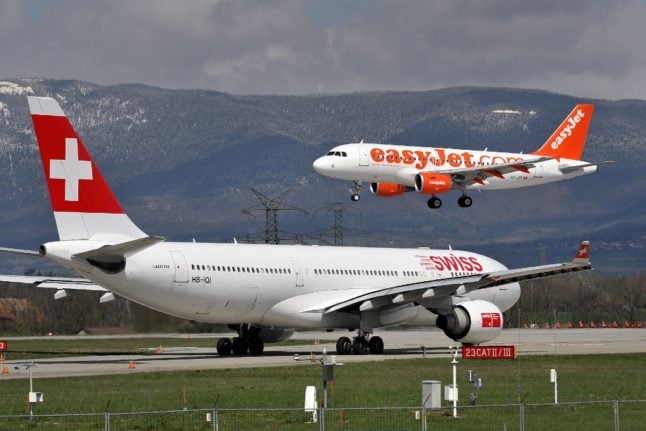 Flights with the UK have been suspended. Photo by AFP

The Federal Office of Civil Aviation (FOCA) suspended air links between Switzerland and the UK from midnight Sunday.

Other countries, including Germany, France, Italy and the Netherlands, have also restricted all travel with the UK, with more nations expected to join the ban.

READ MORE: Travel chaos in Europe –  Which countries have suspended links with UK?

The new strain is believed to have first appeared in the London and Kent areas of the UK in September, and is reported to be up to 70 percent more contagious than other strains. But based on what scientists know so far, the variant does not appear to cause more serious illness than other kinds of coronavirus.

It has not yet been detected in Switzerland, according to authorities.

However, this doesn’t mean it is not yet on Swiss territory. More than 60 flights from the UK — bringing an estimated 10,000 tourists —landed at the Geneva airport this weekend before the ban was introduced, RTS public broadcaster reported.

READ MORE: Covid-19: Where are you most likely to catch the virus in Switzerland?

“The coronavirus has fortunately mutated little since the start of the pandemic. What is very important to know is whether this mutation leads to more severe ailments or to more deaths, which we don’t yet know.”

The question now is whether the variant will respond well to the vaccine which will be introduced in Switzerland within days.

“Currently, there is nothing to suggest that the mutations that occur will resist the effectiveness of the vaccine”, Claire-Anne Siegrist, head of the vaccine unit at Geneva’s university hospitals (HUG) said in an interview.

“It is more like the case of measles, where there are thousands of different strains but the vaccine remains effective”, she added.