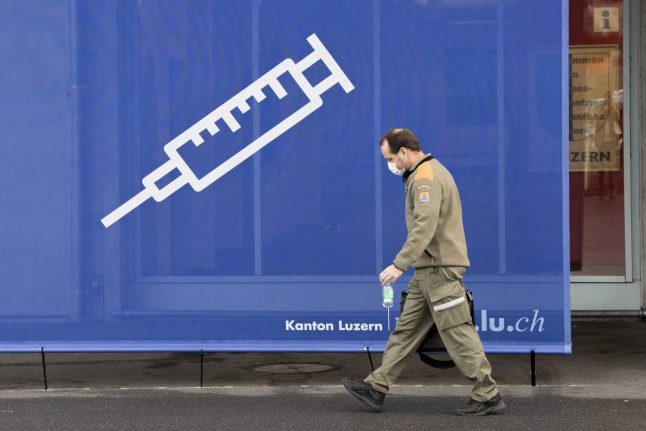 A man walks past a vaccination sign in the canton of Lucerne. Photo: DPA

The woman, from a rural part of the canton, received the vaccine just after 10am in a mobile vaccination centre in the city of Lucerne.

As reported by The Local Switzerland, Lucerne and Appenzell Innerrhoden are the first Swiss cantons to start vaccinations.

READ: When will coronavirus vaccinations start in your Swiss canton?

On Tuesday afternoon, the first delivery of coronavirus vaccines – 107,000 doses – arrived in Switzerland.

The vaccine will be available to the general public from late Spring.

“I am very satisfied that we have now been able to start vaccinations in the canton of Lucerne. These vaccinations are an important element in the fight against the coronavirus,” Graf said.

Britain was the first country in the world to deploy the Pfizer-BioNTech vaccine, with 90-year-old grandmother Margaret Keenan receiving the jab on December 8.

The European Union, of which Switzerland, like Britain, is not a member, is scheduled to start vaccinations on December 27.

Switzerland is battling high levels of new cases and deaths.

The country of 8.6 million people has seen a total of more than 415,000 infections and over 6,300 deaths since the pandemic began.

The Swissmedic regulatory authority announced on Saturday that it had approved the use of the Pfizer-BioNTech vaccine following a two-month rolling review.

“After a meticulous review of the available information, Swissmedic concluded that the Covid-19 vaccine from Pfizer-BioNTech is safe and that its benefit outweighs the risks,” Swissmedic said.

The elderly and those with pre-existing conditions — two million people in total — will be first in line for immunisation.

More elderly and nursing home residents in Lucerne will receive the first of the two required vaccine doses in the coming days, the canton said.

The second jab is administered three weeks after the first.

Produced by US pharmaceuticals giant Pfizer and German biotechnology company BioNTech, the vaccine is based on a new technology that uses genetic material in the form of mRNA (messenger ribonucleic acid).

The Swiss army is receiving, storing and distributing the vaccine doses, which must be kept at -70 degrees Celsius (-94 degrees Fahrenheit).

The army was expecting delivery of nearly 107,000 doses initially, with 250,000 per month to follow from January.

Swissmedic said the data it reviewed showed that seven days after the second injection, the level of protection afforded was above 90 percent in adults.

The regulator said the most frequently-documented side effects were “comparable with those after a flu vaccination”.

The vaccine is not mandatory but is free of charge. Switzerland has secured around 15.8 million Covid-19 vaccine doses, in deals with three manufacturers.

With each of the three different vaccines, two doses are required per person.