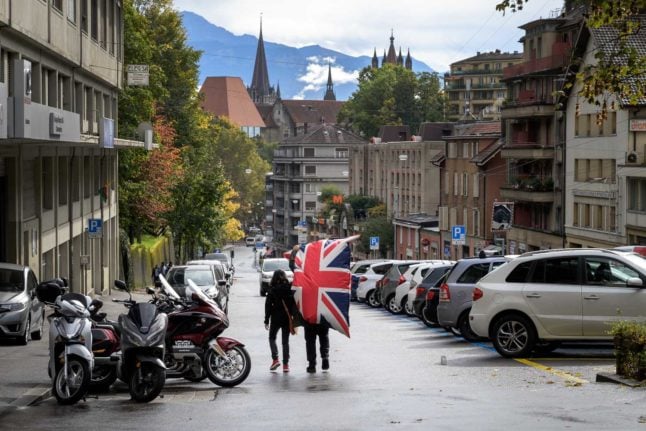 A couple draped in a Union Jack in Lausanne. Photo: FABRICE COFFRINI / AFP

Flights between the UK and Switzerland were grounded on midnight on Sunday, December 20th, due to a new coronavirus strain which has been detected.

From December 21st, the Swiss government put in place an entry ban on people entering from the United Kingdom and South Africa due to the new strains.

While as at January 12th flights between the countries are “limited”, entry to Switzerland from the UK is restricted to Swiss citizens or people who hold Swiss residence permits.

Entry is also restricted for transit passengers. The UK government's website reads: “Travellers arriving from the UK are currently unable to transit Geneva Airport to enter France, unless you hold a residence or cross-border permit for Switzerland”.

Switzerland considers Britain as a 'high risk' country, meaning all arrivals are subject to a mandatory quarantine.

The full list can be seen at the following link.

READ MORE: Which countries are currently on Switzerland's quarantine list?

What are Switzerland's quarantine rules?

Britons with an exemption to enter Switzerland will be required to quarantine.

Anyone required to quarantine must do so for a ten-day period.

Information on mask rules can be found here.

When arriving in Switzerland, you are required to contact the cantonal health authorities within two days. This can be done at the following link.

Even if you have evidence of a negative test, you will still be required to quarantine for ten days.

For ten days after your arrival in Switzerland you must stay in your home or other suitable accommodation without going out.

You are required to avoid contact with other people.

You may leave quarantine after ten days only if you do not have symptoms.

The Swiss government has put together detailed quarantine guidance in English which can be found here. 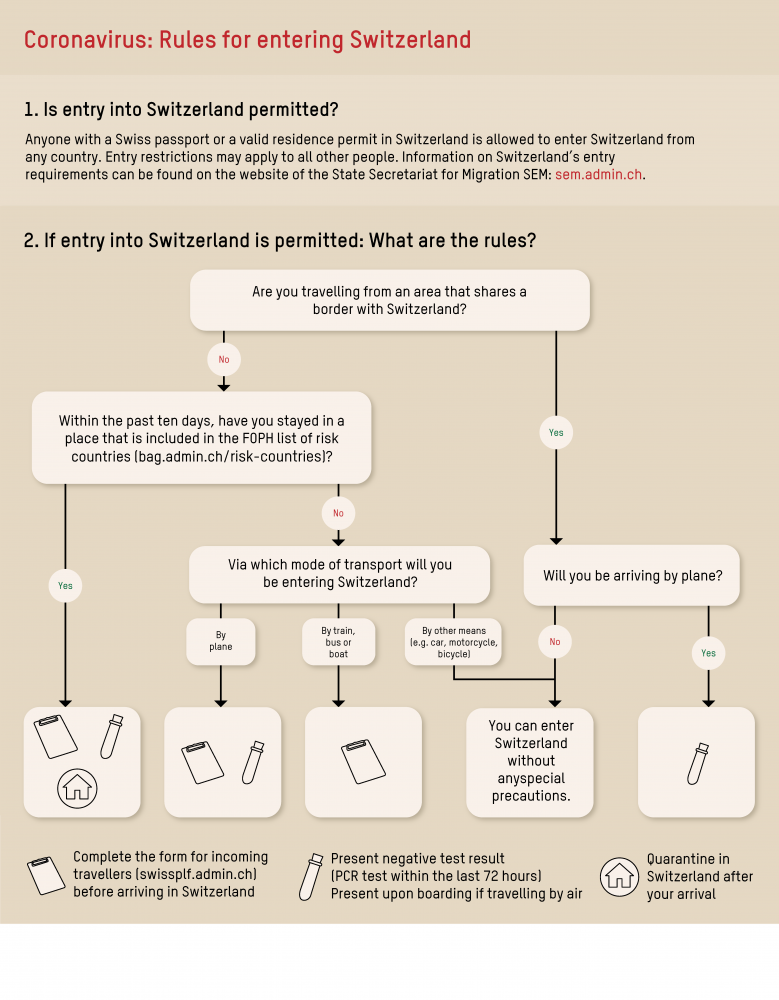 Whether in terms of politics, social system or economy, the Swiss often chart their own course, which fundamentally diverges from that of its European neighbours.

Healthcare is no exception.

The differences lie primarily in who finances the scheme — public versus private — and how the overall system functions.

Like much of the European Union, Switzerland has a universal health system, which means everyone in the country is covered by insurance and has access to medical care.

In most countries, the government typically has control, to a lesser or greater extent, over funding, health insurance, and health providers.

In Germany, health costs are shared by employers and workers, with employees paying 7.5 percent of their salaries into a public health insurance fund, and companies matching that amount.

Italy’s national, system, called the Servizio Sanitario Nazionale, or simply SSN, which is financed mainly though federal and regional taxes, automatically covers all residents. Medical care is largely free of charge at the point of service.

Public healthcare also exists in Austria, with certain portions of salaries being automatically deducted to fund the scheme. However, healthcare is free of charge for low-income people or those who who are disabled, studying, or retired.

Although no longer part of the EU, the UK health system is also based on state healthcare via the NHS. It is funded by taxes which account for about 4.5 percent of the average citizens’ gross income.

The system here is fundamentally different in that it is not tax-based or financed by employers, but rather by individuals themselves.

Basic insurance — KVG in German and LaMal in French and Italian — is compulsory in Switzerland. It doesn’t come cheap — premiums are based on the canton of residence and age, costing 300 to 400 francs a month on average — but it is quite comprehensive; it includes coverage for illness, medications, tests, maternity, physical therapy, preventive care, and many other treatments.

There are no employer-sponsored or state-run insurance programmes, and the government’s only role is to ensure that all insurance companies offer the same basic coverage to everyone and that they have the same pricing.

While companies can’t compete on prices or benefits offered by the basic compulsory insurance — which are defined by the Health Ministry — they can, and do, compete on supplemental polices which offer perks not included in the basic coverage.

All policies have deductibles (also called co-pays) that can range from 300 to 2,500 francs a year.

After the deductible is reached, 90 percent of all medical costs will be covered by insurance, with 10 percent being paid by the patient; however, this co-pay is capped at 700 francs a year for adults and 350 francs for children under 18.

The government does subsidise healthcare for the low-income individuals and households – defined as those for whom insurance premiums exceed 10 percent of their income.

What percentage of a person’s income goes to health insurance premiums?

This depends on wages and premiums, for instance, whether a person chose the cheapest option with a high deductible or the expensive one with a 300-franc deductible.

Generally speaking, however, based on the average monthly income of just over 7,000 francs, about 6.5 percent is spent on premiums.

What happens if you don’t take out an health insurance policy?

Anyone who arrives in  Switzerland must get insured within three months. If you don’t, the government will choose one for you and send you the bill. If this happens you may end up with more expensive premiums than you might have gotten if you shopped around yourself.

If you are still delinquent on your payments, your healthcare will be restricted to emergencies only; any other non-urgent medical treatment will be denied, unless you pay for it out of pocket.

The pros and cons of the Swiss system

Let’s look at the ‘cons’ first. Basically, there is one: the cost.

Not only are insurance premiums high and steadily increasing, but, at 7,179 francs per capita, Switzerland has the third most expensive healthcare scheme in the world — behind only the United States ($12,318) and Germany ($7,383).

Unlike taxpayer-funded models, there is no price grading according to income, so people on a low income pay a high proportion of their income for healthcare than higher earners.

However, the system is generally efficient, has an extensive network of doctors, as well as well-equipped hospitals and clinics.

Patients are free to choose their own doctor and usually have unlimited access to specialists.

READ MORE: EXPLAINED: How to see a specialist doctor in Switzerland without a referral

According to a survey by the Organisation  for Economic Cooperation and Development  (OECD) on how long patients in various countries typically wait for an appointment with a specialist, the share of people in Switzerland waiting a month or more is 23 percent, compared to 36 percent in France, 52 percent in Sweden, and 61 percent in Norway.