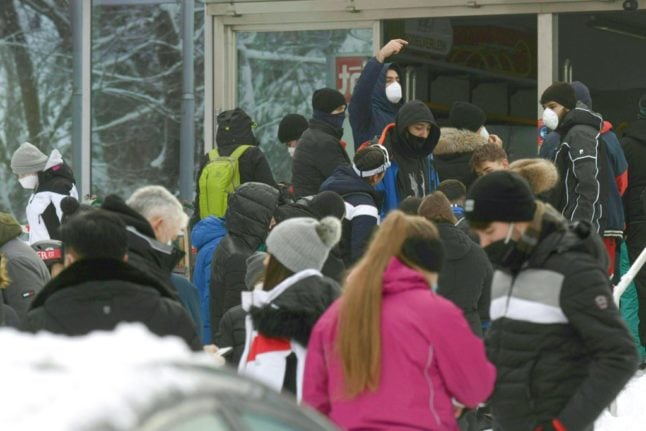 It's not easy to keep distance in ski queues. Photo by AFP

Due to favourable snow conditions on Saturday and Sunday, big crowds came in droves to ski areas throughout the country, Swiss media reported.

For instance, in Flumserberg in canton St. Gallen, the crowds were so large that the fire brigade and police had to be called up, SRF public broadcaster reported.

“The distance rules were not observed for very long”.

In the Valais resort of Anzère, nearly 4,000 people came to ski on Saturday.

The line of those waiting to get on the ski lift extended over 250 metres, and distances were difficult to respect.

“You understand that if we respected the metre fifty distance between each individual, the queue would reach Sion”, said Bertrand Dubuis, director of the Anzère ski lift.

Sion is the capital of Valais, located about 15 km from Anzère.

The situation was the same in the Vaud resort of Villars.

“We patrol the area but can’t be everywhere,” said Florence Maillard, a spokesperson for the Vaud cantonal police.

“You can’t put a police officer between each person in a queue”, she noted, adding that “it is also the responsibility of the skiers and the resorts to ensure that things run smoothly “.

However, Raphael Zimmerli from Junge Mitte political party tweeted that the Federal Council should close the ski areas altogether to prevent crowds swarming around ski lifts, and potentially spreading the virus. “The five-person rule must be consistently enforced at all levels”, he said.

So far, Switzerland has no plans to close the ski slopes, although authorities don’t rule out this step if the epidemiological situation requires it.

Switzerland is the only country in Europe to allow skiing amid the pandemic, but authorities said resorts must rigorously apply strict protection plans and capacity limits.

These measures include regulating queuing in such a way that it “runs in an orderly manner and without major clusters” — a rule that was broken in several ski resorts over the weekend.