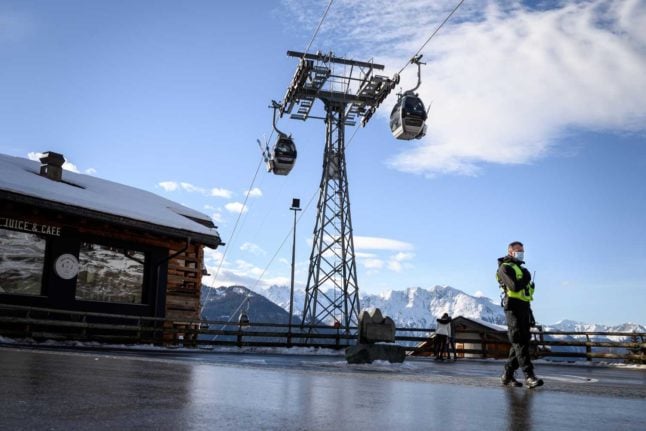 A member of security staff wearing a protective face mask walks past a ski lift in the Alpine resort of Verbier. Photo: FABRICE COFFRINI / AFP

The man complained to Swiss media that Switzerland’s coronavirus measures – which have allowed ski resorts to remain open while they are closed in many neighbouring countries – were not being followed.

Just hours later, he was fired by his employer.

The man, Marco Eberhard, who worked as a lift employee at the Bergün Sportbahnen, told Swiss media that he felt skiers in Switzerland were acting as if the virus did not exist.

“There are huge queues in front of the lift, nobody keeps their distance and at most every third person wears a mask.

“What I am experiencing now makes me doubt humanity.

“The hygiene plans are only there to cultivate their image, so that the ski lifts can be left open.

“The ski areas must be closed.”

A spokesperson for the Bergün Sportbahnen told Swiss news outlet 20 Minutes that the man had “badly violated” his relationship of loyalty with the employer.

The spokesperson said Eberhard would have received the full support of the company if he told them about the violations.

“Bergün has the potential to cause a huge coronavirus outbreak”

Eberhard said the situation had frustrated him so much that he shut down the lift and refused to restart it unless people were following the measures.

“All my requests were of no use. So I parked the lift and said if you don't put on masks now, I won't let you up.

“Only then did it have an effect.”

Eberhard said he was concerned that the virus may spread not only in the region, but throughout Europe.

“Bergün has the potential to cause a huge coronavirus outbreak,” he said.

“The streets of Bergün are jam-packed with people and hardly anyone wears a mask.

“The guests come from all over Europe. We have English, Russians, Italians and Swiss in one place.”