The Covid-19 situation in Switzerland has improved since the beginning of the year. But that doesn't mean the government could soon relax the shutdown measures currently in place.

Switzerland ordered the closing of all non-essential businesses from January 18th in an attempt to curb the spread of the new coronavirus variants from the UK and South Africa that were detected in the country before Christmas.

It also made working from home compulsory in most cases, and limited the number of people allowed to meet in public and private to five individuals.

These new rules were an addition to restrictions already implemented on December 18th, which shut down all restaurants and bars, as well as sports, cultural and leisure facilities.

The measures were supposed to be in effect until January 22nd, but the Federal Council decided to extend them until the end of February.

What is different now?

The R-rate — a measure of the speed at which the disease is spreading — was above 1, meaning that each infected person contaminates more than one person on average. In other words the spread of the virus was increasing.

However, figures published by the Federal Office of Public Health (FOPH) in the past 14 days paint a different picture.


Given the progress that has been made on the epidemiological front, is there a chance that the Federal Council might lift some of the restrictions before February 28th?

First of all, officials have repeatedly said that even with the overall decrease of contaminations and deaths, the numbers are still too high.

Secondly, the new, highly contagious Covid variant is spreading quickly across Switzerland and the authorities want to keep it as contained as possible, at least until more people are vaccinated against the virus and develop immunity to it.

In a recent interview with SRF public broadcaster, Health Minister Alain Berset confirmed that the measures are in place to “allow us to have the third wave under control… to minimise the damage to the economy, society and health”.

“We’d rather do it now, with fewer major consequences, than later in a hurry with many more serious repercussions”, he added.

He added that the new variant “is a real danger. The numbers are exploding and we couldn't accept the consequences. It would also put the vaccination campaign at risk.”

But there is also another reason for the government’s reluctance to lift the restrictions too early: hindsight.

In October, while neighbouring countries were enforcing strict measures to stem the spread of the virus, things in Switzerland were relatively normal, but as the chart below shows infections rates can soon get out of hand. 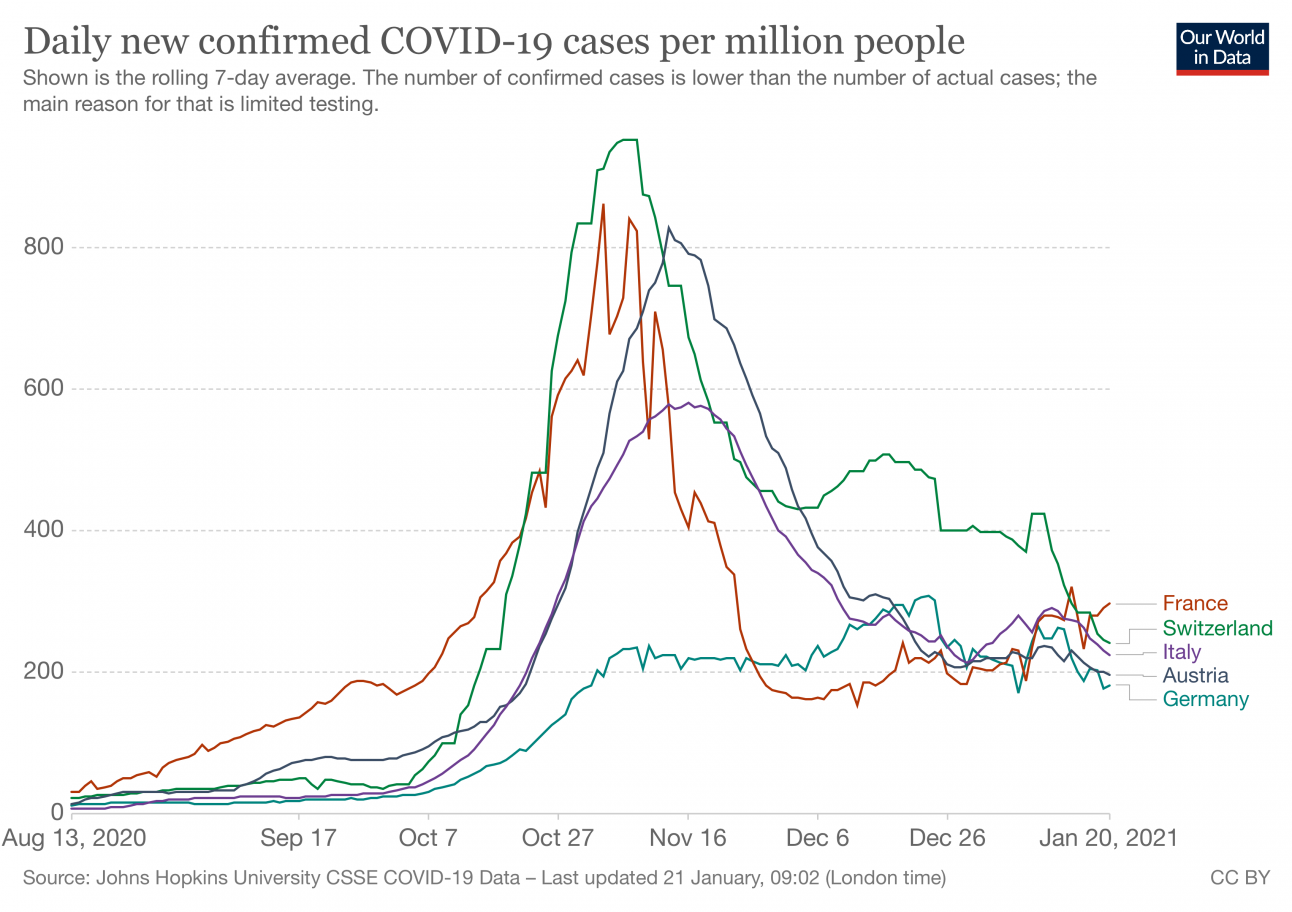 (The chart shows how infections spiked in Switzerland at the end of October and then stayed high throughout December, well above those of neighbouring countries.)

Switzerland also waited three months longer than its neighbours to put in place a mask requirement on public transport – and a full six months before masks were required in indoor areas.

In December, Berset conceded that, looking back, authorities realised “we were too optimistic after the first wave ” and vowed not to repeat the same scenario.

“If one makes mistakes, one thing is clear — they must be corrected as quickly as possible. The health of people has the highest priority”, he said.

If the epidemiological situation continues to improve, is it sure measures will be lifted on February 28th?

That’s the plan, but the final decision depends on whether the new variant if the virus can be contained and whether the public follows all the rules currently in place.

But “if that doesn’t work, we will have to step up the measures”, Berset said.