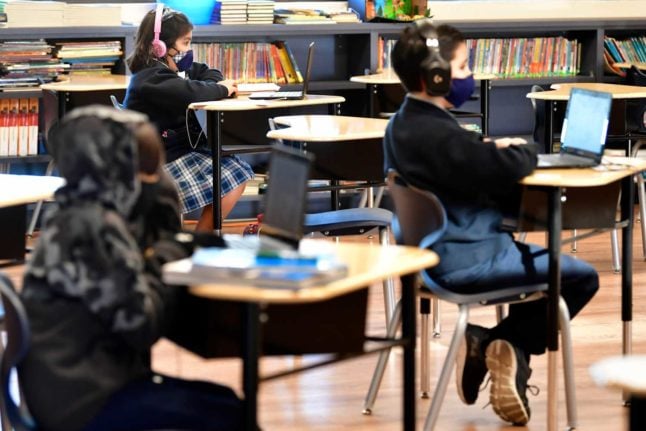 Schools in several Swiss cantons have put in place stricter mask requirements since coming back from the Christmas break.

While some schools already had mask rules in place, these have been tightened in several cantons since the outbreak of the B117 coronavirus mutation which was first discovered in the UK in the lead up to Christmas.

In Zurich, masks are required from grade four onwards, while in multi-year classes some grade three children – who are as young as nine – have been required to wear masks since January 25th.

In Solothurn children must wear a mask from grade five onwards, as do children in Basel Country since January 19th.

Other cantons have adopted different measures, such as Graubünden, where students are measured for their temperature.

'My son refuses to wear a mask. I cannot and will not force him to'

While parents have been critical of the measure, their demands have been mixed.

Some have called for more effective FFP2 masks to be handed out in schools to minimise infection risks, while others have argued that the mask rule needs to be lifted in schools altogether.

Christian Hugi, President of the Zurich Teachers' Association, said the rule – which was there to protect teachers, students and their families – was not onerous.

“Nine or ten-year-olds are no longer small children, but are able to understand the context in this situation, including wearing a mask,” he said.

One primary school teacher in Zurich told Watson it was parents rather than children who were the problem with the new rule.

“The problem is not with the students and that we explain to them why they should wear a mask and how to do it correctly,” she said.

“They are told (by their parents) that with the masks on, they cannot breathe or concentrate. These children then come to my class and are totally insecure.

“I have to work with my students for several years, I cannot stand against the parents, which ultimately harms the children.”

One parent from a school in Geroldswil told the Limmattaler Zeitung that she would not force her child to wear a mask.

“My son refuses to wear a mask. I cannot and will not force him to do it,” she said.

“It is important to protect elderly and vulnerable people from the virus. However, solutions should be found that are acceptable for everyone” the mother, who did not want to be named, told the newspaper.

Unlike many of its neighbours, Switzerland has declined to close schools and move to distance learning.