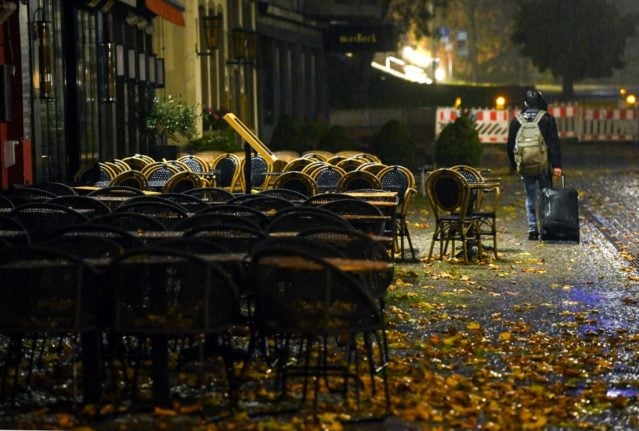 The government ordered the closures in an effort to curb the spread of coronavirus infections.

This is the second time since the beginning of the pandemic that bars and restaurants have had to close their doors for an extended period. Previously they had been out of business for three months last spring.

The extended closures have left these businesses in financial hardship, according to GastroSuisse, the association of hotel and restaurant owners in Switzerland.

In October, as a second wave of infections picked up steam, the organisation cautioned that 100,000 jobs were at risk.

Basing its findings on a survey it conducted among its 20,000 members, GastroSuisse noted that “nearly half of all establishments in the hotel and restaurant industry will go bankrupt by the end of March 2021 if they do not immediately receive financial compensation”.

In Geneva, Laurent Terlinchamp, president of the city's hospitality industry association, described  the dire circumstances he and others in the sector find themselves in.

“We wait for help which never comes, promises which are never kept, and the little help which does arrive is trivial,” he told Agence France-Presse.

He described his members as being in a state of “despair”, adding: “For 30 percent of them, which in Geneva is the equivalent of 600 businesses, it's already too late.”

This sentiment is shared among other restaurant and bar owners throughout Switzerland.

Hundreds opened their establishments on January 11th in defiance against the restrictions.

“I have to do something, otherwise my family will soon have nothing more to eat,” said a café owner from Basel.

Another restauranteur, Sascha Rettenmund, owner of Gentil’s Bar in Selznach, canton Solothurn, also said he re-opened his business because “soon I won't have anything to eat”.

While restaurants and other businesses quickly received financial support when Switzerland went into partial lockdown during the initial wave of infections, GastroSuisse has complained that support during subsequent closures has lagged.

“The key now is how quickly the hardship funds will flow”, the industry federation said in a statement.

It added that 2.5 billion francs in aid is not enough to compensate the sector for all its losses, and the situation “continues to be alarming”.

READ MORE: Why are some restaurants in Switzerland re-opening despite the shutdown?