Rent of thousands of workers from France cross the border to Switzerland each day. Photo by AFP
The Local
[email protected]
@thelocalswitzer


Despite the loss of many jobs due to the coronavirus pandemic, the number of G-permit holders in the Swiss canton remains high.

Cross-border employees from France continue to constitute a significant part of the workforce in Geneva, according to data released by the canton on Thursday.

“This result comes in a year marked by the Covid-19 pandemic, during which, although the economy has slowed down sharply, employment fell back moderately”, the canton said.

G permits are given to “foreign nationals who are resident in a border zone and are gainfully employed within the neighbouring border zone of Switzerland”, State Secretariat for Migration (SEM) says.

Cross-border commuters must return to their main place of residence abroad at least once a week, SEM specifies.

As the diagram below shows, the number of border workers in Geneva started to increase gradually around the year 2000, when Switzerland and the European Union signed the Agreement on the Free Movement of Persons, which allowed workers from the EU to access to the Swiss labour market.

The number has grown steadily, reaching its peak in 2018. 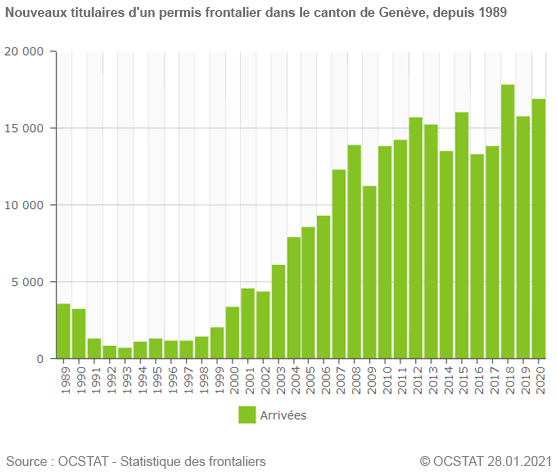 These employees prefer to work in Switzerland because they can earn up to double the salary they would get in France for the same job. Also, taxes are lower in Switzerland than in France.

In fact, earlier in January officials in the Haute-Savoie area of France complained that private Swiss health clinics were poaching essential healthcare workers, creating staff shortages in French hospitals in the midst of the coronavirus pandemic.

Among the new border permit holders, 1,139 are former foreign residents of the canton — that is, people who have left Geneva to settle in neighbouring France. This number was significantly higher in 2020 than in previous years, when it was 870 per year between 2015 and 2020.

In 2020, as in previous years, new border permit holders were hired mainly through employment agencies, primarily for jobs in scientific and technical activities, hotels and restaurants, construction, and healthcare, Geneva authorities said.

Cross-border employees are essential to the canton’s economy, including the healthcare sector; 60 percent of nursing staff at Geneva’s university hospitals (HUG) live in France.

Overall, over 332,000 cross-border commuters are employed in Switzerland.

More than 125,000 work the area around Lake Geneva, which encompasses the cantons of Geneva and Vaud.

About 70,000 are employed in northwestern Switzerland, which shares a border with both France and Germany, and 68,000 workers from Italy work in Ticino.