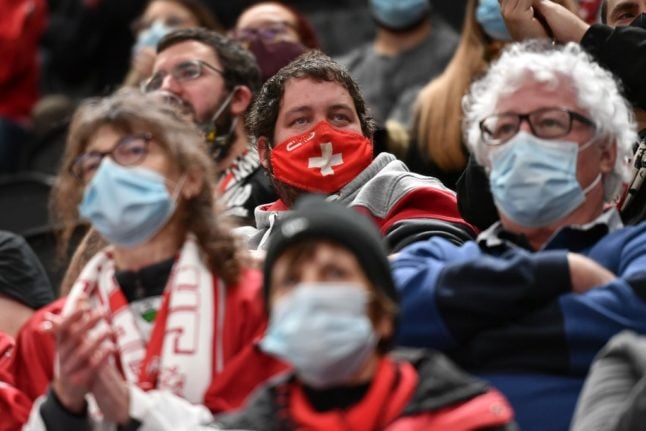 Masks are part of our everyday lives. Photo by AFP

On February 25th, 2020, Switzerland announced its first case of Covid-19: a Ticino resident infected in northern Italy, which at that point was the European hotspot of this new virus.

Swiss authorities said at the time that coronavirus “presents only a moderate risk for the general public”, an assessment which proved, in hindsight, to be wrong.

Within three weeks, a state emergency was declared, the population was confined, schools were closed, and the borders shut. Only grocery stores, pharmacies and health facilities were kept open.

When these measures were taken, Switzerland recorded 2,200 cases and 14 deaths. One year on, nearly 553,000 infections and almost 9,250 deaths have been reported.

IN PICTURES: One year of coronavirus in Switzerland

The authorities made some mistakes in the early stages of the pandemic — errors that could have possibly prevented a number of contaminations.

Most notably, while neighbouring countries made masks compulsory in public places between April and May, Switzerland insisted there was no evidence that masks protected from virus transmission.

This advice was reportedly given because Switzerland only had two and a half weeks of stocks available at the start of the outbreak.

“At the height of the pandemic, the Federal Council’s position on masks varied depending on the stock available in the country,” Swiss media reported at the time.

The change in strategy happened at the end of April, when 90 million masks ordered by the army arrived in Switzerland and health officials advised the population to wear a mask when the physical distance of 1.5 metres couldn’t be respected.

But the government didn’t make masks mandatory until July 6th, when they became compulsory on all public transportation in Switzerland.

Now, of course, masks are ubiquitous and it’s hard to remember a time when they were not part of our daily lives.

Here’s what we learned over the past year:

When the going gets tough, people buy toilet paper.

Within days of the announcement of emergency measures, the toilet paper supply across Switzerland was snapped up by panicked shoppers, causing shortages not only of this item, but also of non-perishable staples like rice, flour, sugar, hand disinfectant, and soap.

The hidden side of Geneva: poverty

It was a phenomenon previously unknown in wealthy Switzerland: thousands of residents – predominantly undocumented immigrants and single parents —queuing up to receive bags of groceries and other necessities from social organisations.

The food distribution, which continued for several weeks, laid bare the poverty in one of the world’s richest cities.

READ MORE: Almost one in ten live in poverty in Switzerland: Report

Prior to the pandemic, few people worked from home. However, the trend was accelerated during the first wave of coronavirus outbreak, when Swiss authorities recommended that people leave their residences as rarely as possible.

More recently, on January 18th, the Federal Council made working from home compulsory whenever possible.

Consequently, the number of job vacancies with the option of working from home has almost quadrupled in Switzerland since the beginning of the health crisis.

READ MORE: Covid-19: How the pandemic has triggered a boom in home working jobs in Switzerland

The importance of testing

As tests became more widespread and available, more cases have been detected and positive individuals isolated, preventing the number of infections from further increasing.

We underestimated the demand for vaccines

When news of vaccine development was first reported, studies showed a high degree of vaccine skepticism among Switzerland’s population.

But when the vaccination programme was rolled out in January, it became obvious that demand may soon outstrip supply.

The government’s promises about vaccines’ efficacy motivated an increasing number of people to get the jab, and the waiting lists for the shot are long in many Swiss regions.

“Expectations have been created that cannot be fulfilled with the current quantities of vaccines. This provokes a lot of strife in the population,” said Thurgau health director Urs Martin.

The biggest lesson of all: even the well-organised Swiss can’t micromanage a pandemic

The Swiss like to be prepared for any kind of disaster, and have all kinds of contingency plans in place to manage whatever catastrophe may befall them.

But coronavirus taught everyone – authorities and public alike — that an unexpected and unprecedented health crisis will wreak havoc with the best laid plans.

Uncertainty will prevail and mistakes will be made, but hopefully the lessons learned will not be lost.