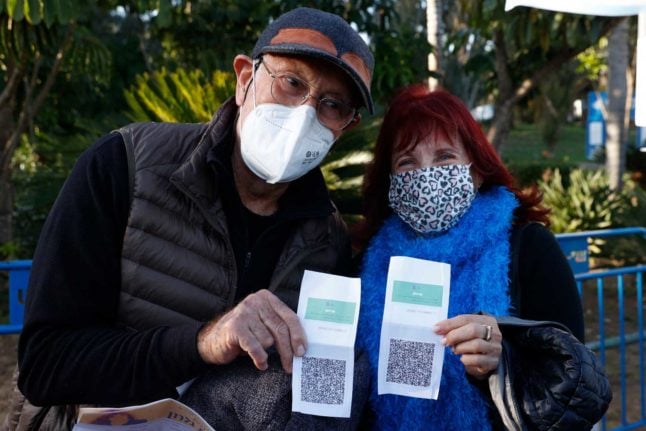 Our reader poll on privileges for vaccinated people caused quite the storm – attracting the most responses The Local Switzerland’s history.

More than 150 people responded to the poll within a 24-hour period – making it the the highest response rate for one of our polls.

While we received dozens of individual responses on the idea – many of them positive and many of them expressing concern – a clear majority supported the introduction of a vaccination card which would give people certain special privileges.

In total, 68.8 percent of respondents told us they would sign up for an Israeli-style ‘immunity card’ for vaccinated people if one became available.

Almost two-thirds think an immunity card is a good idea

A lower percentage than that above said an immunity card was a good idea.

Only 64.9 percent of people thought the idea was a good one, with 35.1 percent opposed.

The finding indicates that roughly four percent of people would sign up for the card even though they think it isn’t a good idea.

Biggest concerns about the plan?

We also asked our readers what their biggest concern was about the plan.

The largest response – 36.6 percent of respondents – said they had no concerns.

More than a fifth – 22.2 percent – told us that they felt the plan would amount to compulsory vaccination.

21.6 told us their greatest worry was for those who had not had a chance to be vaccinated yet would miss out on certain things.

9.8 percent of people said they were worried that people who had the card may still be infectious, as it has not been proven that vaccinated people cannot spread the virus.

As reported by The Local this week, new research indicates that vaccinated people do not spread the virus.

Just over three percent of respondents said they were concerned about privacy and data issues.

What do our readers say about the plan?

By far, the major reason given by people in favour of the idea was that it would allow a return to normality.

One told us “People who no longer pose a public health safety threat shouldn’t be treated as such” while another told us “I want to return to normality as soon as possible”.

Dozens of our respondents emphasised that they were not only concerned by their own welfare, but that of those around them.

“To show I fulfilled my moral duty to protect others and myself. To be able to move more freely. Hug my son.”

One reader said the plan could be extended to all vaccinations.

“I support vaccinations and hold a vaccination card. I would hope this could combine all of our vaccination information in one system that would make it easier to manage and access for travel and other purposes.”

Another said the priority was to make sure that privileges weren’t withheld from people who didn’t have a chance to vaccinate – but only from those who refuse vaccination as they “don’t care about the common good”.

Another told us they support the idea “Provided they give us all access to the vaccine prior its implementation. If the do it right now, it would be tremendously discriminatory, as there is a large proportion of the population that still don’t have the chance to get vaccinated”.

Of the 31.2 percent of people who said they would not sign up, plenty were concerned that it would lead to unfair consequences for those who weren’t vaccinated.

“(It’s a) Horrible idea to split people in a 1st and 2nd class” said one reader.

Others said it would disadvantage people who could not take the vaccine.

“There are people like me who cannot get the vaccine why should i be excluded from traveling if i have a test for example?”

There were also a fair share of armchair doctors who preferred vitamins over vaccines.

“It’s discriminative and does not give way to natural and healthy ways of conquering the virus through vitamins and healthy life and diet.”

There is no scientific evidence to suggest diet is a factor in contracting the virus.

Plenty told us that while it may sound like an unusual idea, similar schemes have been implemented without controversy before.

“I remember travelling to Africa a while ago and needed to vaccinate and got vaccination card. So why not?” one reader asked.