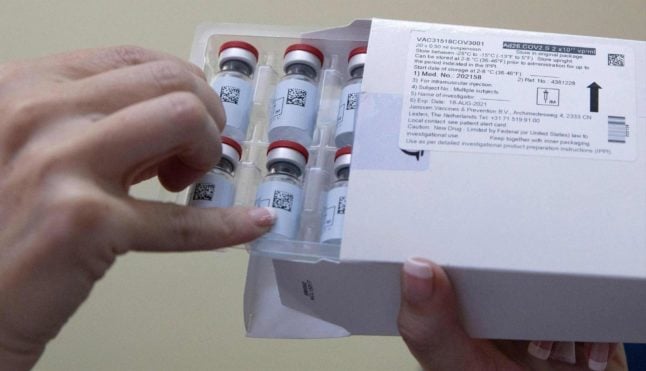 Switzerland may be ordering a vaccine from Johnson & Johnson. Photo by Phil Magakoe / AFP

The Federal Office of Public Health (FOPH) has been negotiating with the manufacturer since January, but has not yet said when the order will be placed or how many doses will be purchased, Switzerland’s Tages Anzeiger newspaper reports.

However, to date only Moderna and Pfizer are in use in Switzerland, and even those doses are in short supply, though some more will likely be delivered in March and April.

Deliveries from Novavax and Curevac are not expected until May, although the two manufacturers are looking to be approved from the European Union within days.

Switzerland declined to approve the AstraZeneca vaccine in early February and it looks unlikely to be approved because there are doubts about its effectiveness, the regulatory agency Swissmedic said.

In fact, Switzerland is reportedly investigating the possibility of selling the doses it agreed to buy from AstraZeneca because “it has a bad reputation”, said Nora Kronig, FOPH’s deputy director.

“In the current situation, Switzerland is not dependent on the vaccines from AstraZeneca”, she noted.

Unlike the Moderna and Pfizer vaccine, which require two shots about four weeks apart, the Johnson & Johnson vaccine requires only one injection, although its efficacy is believed to be slightly lower than the 94 to 95 percent effectiveness attributed to Moderna and Pfizer products.

Where is Switzerland now with its inoculation programme? READ MORE: Which Swiss cantons are vaccinating fastest against coronavirus?

But as the chart below indicates, Switzerland’s rate of vaccinations is low compared to the UK, France, Italy, and Spain.