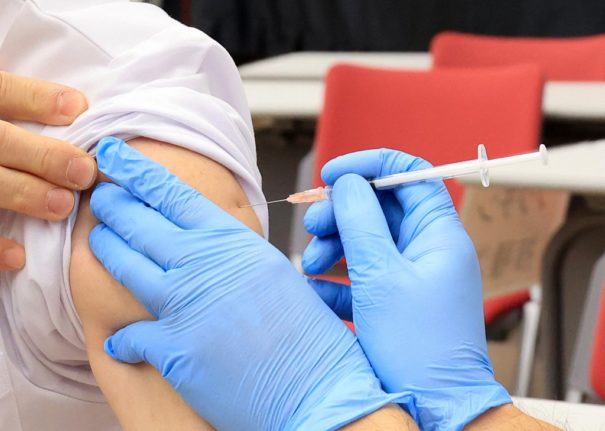 Pre-registration for the Covid shot is possible in several cantons. Photo by YOSHIKAZU TSUNO / POOL / AFP

As vaccines are currently in short supply, the wait for an appointment is long, especially for those under 75 or who don’t fall into the ‘high risk’ category — that is, people suffering from certain chronic ailments.

Some cantons decided to speed up the process by allowing general public to register for the shot.

“In many cantons, everyone who wants to be vaccinated has been able to register for several weeks,” said Tobias Bär, communications officer at the Conference of Cantonal Health Directors.

Basel City, for instance announced that residents from the age of 16 can pre-register for a vaccination appointment.

It said, however, that “young, healthy people will probably only get an appointment in June”, after priority groups defined by the Federal Office of Public Health have received their shots.

The same option exists in Luzern, where 9,500 people have already pre-registered for the vaccine.

Geneva, Aargau, Freiburg and Solothurn, along with some other cantons, offer this possibility as well, but they don’t publicise it to avoid overloading their registration system.

You can check the availability of pre-registering in your place of residence by going on your canton’s website and clicking on the vaccination link(s).

Even if you are able to do so, keep in mind that you will not get your shot immediately or anytime soon. However, there are advantages to putting your name on the list.

One benefit is that when appointments open up for general public, those on the list will be called first, in the order in which they pre-registered. So the sooner you do it, the better.

Another advantage is that “anyone who registers now helps us with the planning,” according to the Aargau Health Department.

In other words, cantons will know how many doses they will need for everyone who wants to be inoculated.

Registered people would be contacted by SMS as soon as an appointment becomes available in their area.

The federal government still has over 192,000 doses in stock that will distributed among cantons.

In all, Switzerland ordered over 32 million doses from five different manufacturers. Some, like the vaccine manufactured by AstraZeneca may not be used, while those ordered from Novavax and Curevac are not expected to be delivered before late spring.

Only vaccines from Pfizer / BioNtech and Moderna are currently administered  in Switzerland.