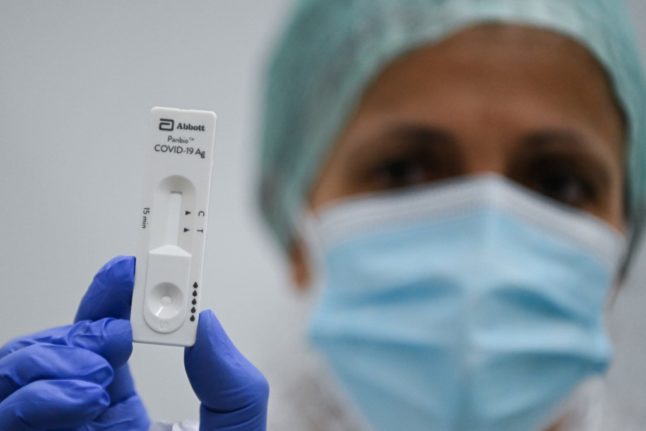 From free tests to growing anti-coronavirus protests, here’s the news that’s fit to print this morning.

From Wednesday, April 7th, free coronavirus tests will be made available in Swiss pharmacies.

The tests were originally planned to be available in Swiss pharmacies from mid-March.

The delay was due to concerns that the tests may not be accurate enough, but Swiss authorities now say they are convinced.

Swissmedic has however warned that self-tests from abroad should not be used as they may be unreliable.

Temperatures set to drop across Switzerland

The mercury is set to plunge all across Switzerland as a result of a cold front which will cross into Switzerland on Tuesday night.

Snowfalls and sub-zero temperatures are expected.

On Tuesday, we can expect -2 degrees in the west and to -4 degrees in eastern Switzerland.

Overnight, the temperatures are set to fall to between -2 and -8 depending on the location.

Daily maximums are expected to rise to a maximum of 3.

The cold front will stick around until Friday, potentially bringing warmer temperatures for the weekend.

Growth in ‘anti-coronavirus movement’ despite banning of protests

The coronavirus sceptic movement is growing Switzerland, despite the more frequent banning of protests, newspaper Le Temps reported on Tuesday.

While initial protests were largely confined to Zurich and Bern, recent demonstrations have broken out in smaller cantons, with some 3,600 people in Aargau in February, around 6,000 in Graubünden in early March and more than 8,000 in Liestal on March 20.

The Swiss Federation of Fitness Centers (FSCFS) has filed a complaint against the Swiss government for its closure of gyms and training facilities due to the coronavirus pandemic.

Arguing that the closures have been “disproportionate”, the FSCFS wants the Swiss government to pay the fitness centres to compensate for their losses due to the “arbitrary forced closures”.