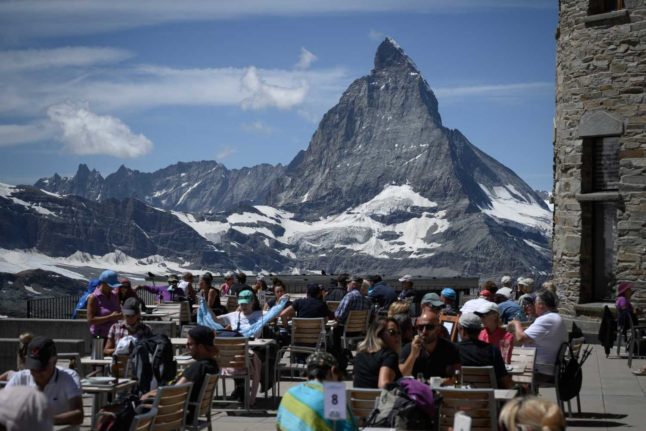 Switzerland’s government announced Wednesday it would significantly ease its Covid-19 restrictions despite the fact that the landlocked country’s epidemic “remains fragile and has even worsened in recent weeks”.

The government said that as of Monday, Swiss restaurants and bars, which have been closed since December, will be permitted to open outdoor seating areas, while cinemas and other leisure facilities will reopen, as will outdoor and indoor sports facilities.

Here’s what you need to know

Restaurants and bars may reopen terraces

Outdoor areas of bars and restaurants may again open up all over the country.

A maximum of four people may sit at a table – all all people must be seated.

The government will continue to fund businesses, even with the openings.

“Because many catering businesses are not yet able to cover their costs with this regulation, the economic support for the catering industry will continue as before,” the government said in a statement.

Audiences are again allowed at sporting events and concerts.

The numbers will be capped at 100 for outdoor events and 50 for indoor events.

These numbers cannot exceed one third of the capacity of the venue. For instance, if an indoor event space only has capacity for 100 people, then the capacity will be 33.

Food and drink will not be served.

Leisure and entertainment may reopen inside

Leisure and entertainment facilities such as zoos and botanic gardens may reopen their indoor areas.

Masks must be worn inside.

Wellness facilities and pools must however remain closed.

Individuals and groups of up to 15 people are again allowed to play amateur sport, including tournaments and competitions.

However, masks must be worn outside where distance of 1.5 metres cannot be kept – and both masks and distance must be worn/kept indoors.

Face-to-face teaching will again be allowed at universities and in adult education from Monday.

There is a restriction to a maximum of 50 people and a capacity limitation to a third of the room, as well as mask and distance requirements.

More information is available at the following official link.

“We are taking a risk”

The government warned that it was too early to say whether increased socialising during the Easter holidays last week would cause a fresh spike in infections.

But, the government stressed in a statement, it “estimates that the risks associated with this easing are acceptable”.

Daily case rates in landlocked Switzerland are roughly the same as in neighbouring Germany and Italy, though lower than the European Union average — and nearly a third of the rate in neighbouring France.

Swiss daily case rates bottomed out in the second half of February but have been on the rise since early March.

Swiss Health Minister Alain Berset told reporters that a strategy of slowly lifting restrictions in recent months had allowed the country to “maintain control over the pandemic”.

“We’re not facing an explosion,” he said. While the case incidence rate remains too high, the government pointed out that hospitals were not overburdened.

It also highlighted progress made on vaccinations, with nearly half of people aged over 80 and around 30 percent of those aged between 70 and 79 now fully immunised.

Switzerland has administered 1.8 million vaccine doses, with 686,000 people now having received both injections — giving the country one of Europe’s higher fully-vaccinated shares of the population.

Berset cautioned that the easing of restrictions should not be seen as a signal that the danger is over and the population can let down its guard. “That is not at all the case,” he said. “We need to continue being careful.”

Virtually all the activities again permitted from Monday should be practiced only while wearing a face mask and with appropriate physical distancing, the government said.

And as far as possible, activities should take place outdoors, where the risk of infection is far lower.