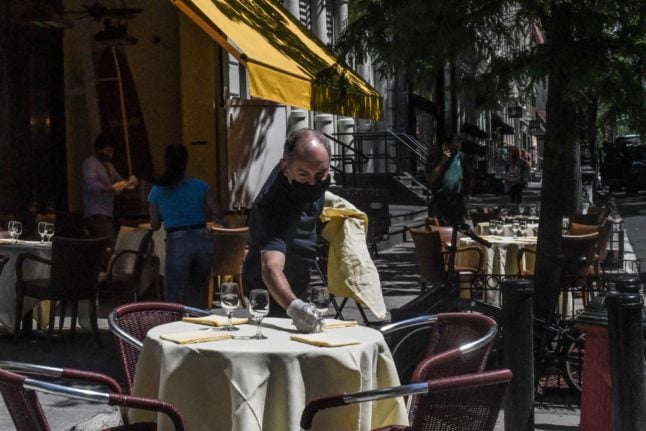 Restaurants will be able to open up their outdoor terraces on Monday. Photo by STEPHANIE KEITH / GETTY IMAGES NORTH AMERICA / Getty Images via AFP

The government said that as of Monday April 19th, Swiss restaurants and bars, which have been closed since December, will be permitted to open outdoor seating areas, along with cinemas and other leisure and sports facilities.

EXPLAINED: What are Switzerland’s coronavirus measures?

The most concerned by the decision, the umbrella organisation of the restaurant and hotel industry Gastrosuisse, said in a statement that the re-opening of outdoor spaces “is the first step in the right direction”.

However, restaurants that don’t have a terrace will not be able to open, “which implies inequalities of treatment,” the association pointed out.

The Swiss Conference of Cantonal Health Directors, on the other hand, “is satisfied with the gradual and cautious re-opening strategy, which is line with the wishes of the cantons”.

The Liberal Party also praised the decision to re-open, saying that the “the government has shown common sense”.

“By continuing to respect the sanitary measures, we can hope for further relaxations in the coming weeks”, the party added.

The Swiss People’s Party (SVP), which has been pressuring the Federal Council for weeks to re-open the economy, said the government is moving too slowly.

“The decisions are certainly pointing in the right direction, but these are only very small openings”, SVP said, adding that keeping indoor restaurants closed “is totally arbitrary and incomprehensible”.

The Swiss Union of Arts and Crafts (USAM), an association of small and medium-sized companies, also noted that the measures don’t go far enough and criticised the Federal Council for its “hesitant management” of the Covid-19 pandemic and “purely symbolic” relaxations.

However, on the opposite side of the political spectrum, the Green party considers the easing as “irresponsible” while the pandemic is still ongoing.

The Socialist Party has also spoken out against the re-opening, warning that the Federal Council is “walking a tightrope”.

Perhaps the most dire warning comes from the Medical Society of French-speaking Switzerland, whose president Philippe Eggimann said that by partially re-opening the gastronomy and other sectors of the economy, “we are playing with fire”.

“The game is not yet won and we are taking a real risk”.

What could happen as a consequence of the easing is that Switzerland could be hit by a new wave of infections in the summer, “while our European neighbours, still confined for the most part, will emerge from it just then”.

For Eggimann, it would have been more judicious if the government “waited until 50 percent of those over the age of 50 are vaccinated before taking these new measures”.

Health Minister Alain Berset conceded that the easing of measures while the country’s health situation remains fragile and has even worsened in recent weeks is “a calculated risk, but certainly not a blank check”.