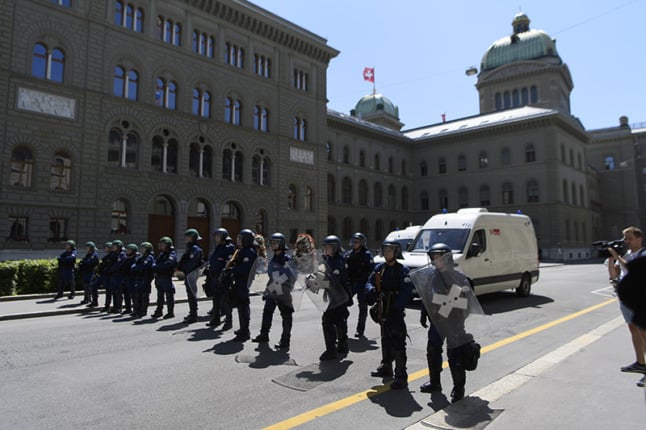 The city of Bern had called upon the protest organisers to drop Saturday’s unauthorised demonstration — which organisers had expected to attract some 50,000 people — and police were ordered to prevent large numbers of people gathering.

The maximum number of people currently allowed at demonstrations in Switzerland is 100, with a limit of just 15 people for private events.

The demonstration had been widely advertised on social media under the “Swiss Freedom Rally” banner and people from across the country had signed up to attend.

To prevent the demonstration, Bern canton police forces cordoned off a large area around the Bundesplatz, the plaza in front of the Bundeshaus (Swiss Parliament Building), and carried out identity checks.

There was a large police presence at the square, with officers wearing riot gear and multiple police vans and a water canon on standby, Swiss news website 20 Minuten reported.

In the end, only around 100-200 people gathered at the Bundesplatz.

Police carried out multiple identity checks and ordered more than 100 people to leave the area, filing reports against some of them, the Bern canton police said in a tweet. A small group of demonstrators, who were not wearing masks, also walked around the city centre shouting “Liberté!” swinging cowbells, according to a 20 Minuten reporter at the scene, who said there were also two arrests.

Another demonstration — originally planned for Zurich, but moved at the last minute — took place in Urnäsch, a municipality in the canton of Appenzell.

Over 500 people participated in the unauthorised event, according to Appenzell Ausserrhoden canton police, while reporters at the scene estimated there were around 1,000 people present. However, there were no riots, damage to property or arrests.

Despite its unauthorised nature, the police allowed the protest to take place, although the organisers of the demonstration were reported for violating Covid-19 regulations, according to 20 Minuten.

Ausserrhoden canton police spokesman Dominic Schwarz told 20 Minuten reporters they were letting the demonstration run because although it was unauthorised, it was peaceful. They said because it had been moved, they had found out about it with very little notice.

“It’s also a question of proportionality,” Schwarz said, adding that the police would intervene in the event of property damage.

The demonstrators also processed through the municipality, swinging cowbells and waving cantonal and Swiss flags, as well as banners with slogans such as “Together not alone”, Swiss news website Tagblatt reported.

Some protesters were also collecting signatures for the “Stopp-Impfpflicht” (stop compulsory vaccination) initiative, according to 20 Minuten.

Demonstrations have become a part of weekend life in Switzerland, with several thousands of people protesting against the government’s pandemic policies in Wohlen, Liestal, Altdorf, Schaffhausen, Lugano, Rapperswil, Aaarau and other Swiss towns over the last few weeks.

Last weekend, for example, some 1,500 protesters gathered in Aarau and a similar demonstration is planned for Neuenburg next Saturday.

Switzerland relaxed a number of its coronavirus measures on April 19th, with further easing expected from May 31st when indoor restaurants will open and larger events will be allowed.

However, critics feel the return to normality is taking too long.