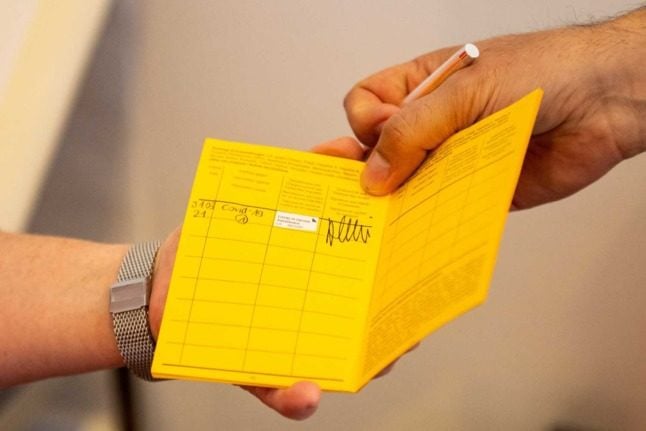 With vaccinations continuing throughout Switzerland and across the world, governments have begun plotting their first steps in returning to normal.

It has become clear that a central aspect of this return to normality will involve the implementation of a coronavirus ‘immunity card’.

Otherwise known as a ‘green card’ or ‘vaccination certificate’, the certificate is likely to be a digitalised form of the existing vaccination passport which would entitle holders to certain privileges.

Here’s what we know – and don’t know – about the pass.

UPDATED: Everything you need to know about Switzerland’s coronavirus immunity card

When is it supposed to be implemented?

The Swiss government has announced the immunity card will be implemented from June 7th onwards.

More information about the specific implementation is available at the following link.

The Swiss government said that the document should be easy to use and to read – which is why it will be implemented uniformly across the country.

Berset told Swiss media that he did not want it to become a cantonal responsibility as the result would be 26 different types of certificates.

Swiss media reports that when the immunity pass is up and running it will be implemented as a QR code.

People can either carry it in paper form (i.e. printed out as it’s a little difficult to draw an accurate QR code) or on a mobile phone, tablet or other similar device.

Indications are that it may become a part of the Swiss Covid app, although more work needs to be done in this area as this app does not work in older smartphones.

What will it allow me to do?

Although the exact specifics of a coronavirus immunity card have not been defined in Switzerland, the ‘card’ – which would be in digital form – is expected to have two major functions: domestic and international.

The government said it aims “to develop a standardised, forgery-proof and internationally recognised certificate”.

On the one hand it will form part of an international arrangement which will allow for travel to again take place.

On the other, it will allow certain privileges to people domestically – for instance visiting bars and restaurants, along with events and participating in sports and leisure activities.

This will not however mean two separate cards – all functions will instead be placed on the one document.

The exact specifics about what you are allowed to do have yet to be determined.

What data will it show?

Initial media reports focused on the vaccine aspect of the new plan, i.e. that people who had been vaccinated will have their details recorded in the card and be entitled to do certain things.

It has now become clear that people who have tested negative to the virus and those who have contracted it recently but have recovered will also be entitled to certain privileges.

How will it protect my data?

This has been a major concern among both government and citizens.

While government wants to ensure that the data is correct and that people cannot fake or forge the passes, citizens have expressed concerns that their data may not be safe.

The Federal Council has promised to adhere to data protection rules, although the way they plan to do that has not been specified.

One possible solution is to make sure that the QR code operates in an anonymous manner, i.e. that when it is scanned it does not reveal any information about the person, only that they have immunity to the virus.

As reported by Switzerland’s Watson news agency on May 20th, the Federal Council has yet to indicate the specifics of its plan to adhere to data rules.