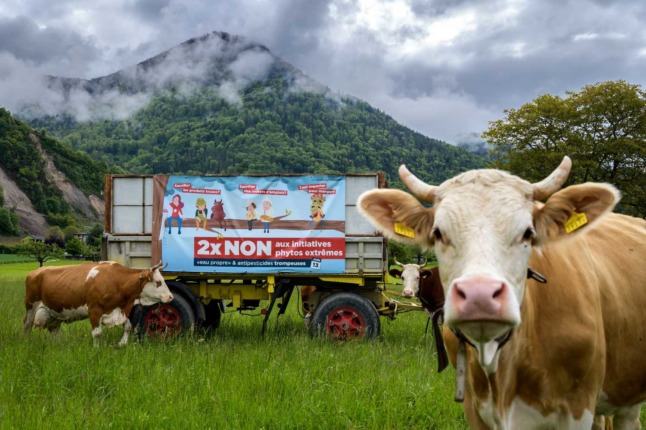 On June 13th, Switzerland will go to the polls to decide five questions. One, a ban on pesticides, has already caused controversy. Photo: Fabrice COFFRINI / AFP

The five issues that are at stake include the controversial Anti-Covid Law, which would give the government a legal basis to impose restrictions aimed at tackling the pandemic on an ongoing basis.

The CO2 Act seeks to introduce several taxes and measures to halve greenhouse gas emissions by 2030.

The Anti-Terrorism legislation would strengthen previous standards against terrorism and organised crime, punishing recruitment, training and travel with an intent to commit a terrorist act.

The Clean Drinking Water Initiative “requires that agricultural subsidies be allocated only to agricultural practices that do not harm the environment and do not pollute drinking water”.

They refer specifically to pesticides, antibiotics, and imports of fodder and fertilisers used in farming.

The initiative “For a Switzerland free of synthetic pesticides” calls for the ban on these products in agriculture, in the public sphere, and would also apply to imports of products from abroad.

The idyllic image of peaceful Swiss Alpine pastures is being shattered by upcoming votes on pesticides which have sharply divided opinion in rural Switzerland.

The Swiss will vote on June 13 on a proposal which, if it passes, would make Switzerland the first country in the world to ban synthetic pesticides.

Proponents seek to ban pesticides with non-naturally occurring chemicals — and not only for agriculture but also for public green spaces, private gardens, and even for killing the weeds on railway tracks.

A campaign marked by heated debates boiled over in the western Vaud region when arsonists torched a trailer in a field displaying banners calling for a “No” vote, infuriating farmers.

Meanwhile farmers in the “Yes” campaign say they have been the victims of insults, threats and intimidation.

Slurry on the ballot

Any topic can be put to a national vote as long as it gathers 100,000 signatures in the wealthy nation of 8.6 million people.

Launched by a committee headed up by a winegrower and a soil biology professor from Neuchatel University, the pesticides initiative gathered 121,307 signatures.

A parallel vote on a second initiative is also being held, on an initiative entitled “For clean drinking water and healthy food”.

To limit the amount of slurry being used on fields — and thereby potentially entering the water system — it would also limit subsidies to only farms that can feed animals with the fodder they produce themselves.

Supporters of the initiative, which garnered 113,979 signatures, say taxpayers’ money must not be used to subsidise damage to public health and the environment.

Large agricultural organisations, including the Swiss Farmers’ Union and the Association of Swiss Vegetable Producers, have called for a double “No” vote, deeming the measures too extreme.

“We feed you, we get punished,” runs their slogan.

Beekeepers want a double “Yes” vote, while the Bio Suisse group of organic producers and gardeners — in a country where organic farming accounts for 15 percent of all farms — wants a “Yes” vote on pesticides and a “No” vote on the second initiative.

It says that despite the second initiative’s good intentions, the fodder limits would make the work of organic farmers all the harder, without resolving the issue of intensive farming — as large farms could simply renounce subsidies and keep big herds.

The Swiss government recommends a double “No” vote, warning of the risks to food supply that could see prices soar, to the detriment of lower-income households in a country where the cost of living is already high.

“Agriculture must change, we agree on that,” Francis Egger, deputy director of the Swiss Farmers’ Union, told AFP.

“There are two times 100,000 people who have signed, so there is a clear message from consumers,” he admitted, adding up the two separate petitions.

But these initiatives go “too far”, he said, and risk heavily penalising Swiss farmers who have already made significant efforts to reduce pesticide use.

Antoinette Gilson, a biologist by training and a member of the committee behind the pesticides initiative, insisted: “Our initiative is not directed against farmers.”

It aims to ban synthetic pesticides, which are “the most dangerous”, and to which farmers themselves are highly exposed, she said, but not organic pesticides or alternatives that do not contain “toxic chemicals”.

Some 107 active ingredients used for bio-pesticides, including sulphur and copper, would still be authorised, as opposed to 383 today.

The two initiatives started the campaign with clear leads in the polls, but have seen their support levels drop.

A poll published on June 2 by the Tamedia press group said the pesticides initiative had 42 percent support, while the drinking water initiative was running at 41 percent backing.

Rural voters favour rejecting the proposals while urban voters are overwhelmingly in support of them, the survey showed.