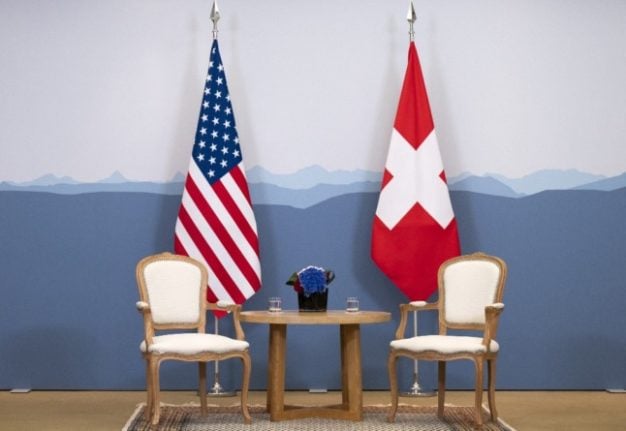 Switzerland and the United States seemingly have little in common.

One is tiny and landlocked and the other is vast, spreading from “sea to shining sea”.

One is neat and organised and the other one…not so much.

But the two nations do share a bond, one that dates back to the 18th century.

When America won its independence from England in 1776, John Adams, one of the founding fathers, looked for a model for the still-to-be created US constitution.

He found one across the ocean, in Switzerland, a country which was 485 years old at the time and a confederation of 13 cantons.

An article published by the US National Museum points out that “it was during the late 18th century, during its war of independence against the British, that the USA first spoke of ‘Sister Republics’ in relation to Switzerland. The USA was comparing its own war of independence against the British crown with the existence – at the time, admittedly, idealised – of a federal republic in an otherwise monarchical Europe”.

Adams, according to historical accounts, was inspired by the Swiss concept of confederacy, and especially the federalism, sovereignty, and resistance to oppression that played such an important role in the creation of Switzerland in 1291.

A decade later, “when the American Founding Fathers gathered in Philadelphia in the summer of 1787 to write a new constitution and ‘to form a more perfect Union’, they had Switzerland in mind”, according to a book titled “Historical Reflections” by Jonathan Steinberg.

Another publication, by US author Stephen P. Halbrook, noted that “the Swiss experience had a positive influence on the American Revolution and figured in the debates on adoption of the United States Constitution”.

A pamphlet that circulated at the time stated that “Switzerland, like us, is a republic, whose thirteen cantons, like our thirteen States, are under a federal government, and which besides is surrounded by most powerfully nations, all jealous of its liberty and prosperity. And yet that nation has preserved its freedom for many ages…Why should we not follow so glorious an example”.

This view was shared by Congressman John Witherspoon, who called Switzerland a model of a “well planned Confederacy which Americans would do well to imitate”.

In an era that pre-dated mass media, “remarkable is…a considerable knowledge of Switzerland and Swiss history by the American politicians of the time”, a report by Harvard University pointed out.

So which ‘Swiss concepts’ did the United States adopt?

Constitutions of both countries emphasise common values such as fundamental human rights and separation of powers.

And it is often said that the Swiss model inspired, among others, the second amendment to the US constitution: “A well regulated Militia being necessary to the security of a free State, the right of the people to keep and bear Arms, shall not be infringed”.

However, many differences exist as well.

Among them, “Switzerland chose not to vest extensive power in a single president; instead, executive power was distributed among seven liberal leaders”, according to the National Museum.