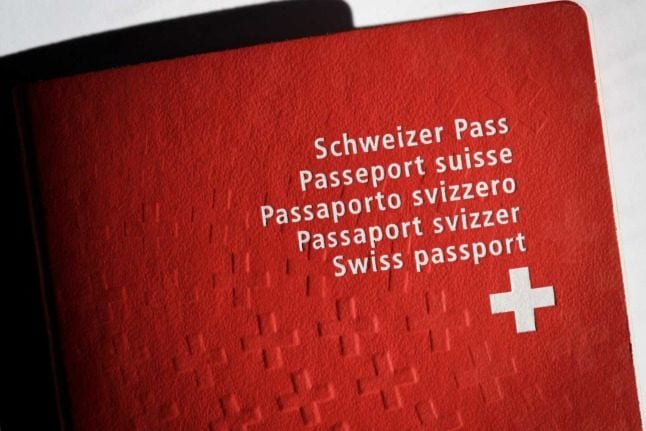 How will the new citizenship proposals affect you? Photo: Fabrice COFFRINI / AFP

Depending on a foreigner’s nationality, length of stay in Switzerland, and other circumstances, getting a Swiss citizenship can vary from relatively uncomplicated to onerous.

Admittedly, not each of the estimated 2.1 million foreign nationals living in Switzerland — about 25.1 percent of the population — wants to become a citizen. But those who do, frequently find numerous hurdles on their way, ranging from eligibility requirements to the application process itself, which varies from canton to canton.

In 2019, the last year for which statistics are available, just over 41,000 foreigners received their Swiss passports.

Is there anything new on the naturalisation front?

This subject has been fuelling political debates for many years, and various proposals are being discussed now in both upper and lower chambers of the parliament.

Five are currently being debated, according to the Watson news platform, which analysed this issue.

In Latin, this term means citizenship acquired when a child is born in Switzerland. Unlike many other countries, including the United States, those born of foreign parents in Switzerland don’t automatically obtain Swiss nationality.

However, deputy Paul Rechsteiner from the Social Democratic Party submitted a parliamentary motion in March, arguing that anyone born in Switzerland should be automatically entitled to a Swiss passport.

Though this may sound reasonable, jus soli has no chance of succeeding in Switzerland, Thomas Kessler, former integration officer for the canton of Basel-Stadt told Watson.

One of the reasons cited by Kessler: “The fear of childbirth tourism would be too great”.

However, legal scholar Barbara von Rütte considers this proposal to be difficult, but not hopeless.

“If children of parents who have lived in Switzerland for five years are naturalised, the proposal has a better chance of succeeding than if every child simply born on Swiss soil is naturalised”, she said.

However, for this to happen, naturalisation of second-generation foreigners must be made easier.

As The Local reported in March, a Green Party MP Lisa Mazzone submitted such a proposal to the Council of States,  the upper house of the Federal Assembly, in March.

“We have to facilitate citizen integration, and that includes second generation foreigners, who have their roots here but are often without a Swiss passport”, Mazzone said.

This is not the first attempt to grant citizenships to Swiss-born foreigners.

The Federal Council presented similar proposals three times — in 1983, 1994 and 2003. They  were supported by a large majority in parliament but nothing came out of them in the end.

This time, however, the odds are better, especially since in 2017 the majority of voters approved easier naturalisation procedure of the third generation of foreigners.

“A survey by the Federal Statistical Office has shown that around 59 percent of respondents are in favour of automatic naturalisation for the second generation”, von Rütte pointed out.

According to this proposal, which has been occasionally brought up in the parliament, children of foreign parents should have the right to naturalisation when they complete their compulsory schooling in Switzerland.

The chance of this motion succeeding is similar to that of second-generation foreigners — that means, fairly good.

“It’s about children who grew up here and went to school. That can be conveyed well to the people”, von Rütte noted.

Another proposal is that everyone who has lived in Switzerland for four years should have the right to naturalisation regardless of their residence status.

In addition, children whose parents are domiciled in Switzerland when they are born should automatically receive the Swiss passport.

Thos is a proposal from a group called  “Aktion Vierviertel” composed mainly of professionals involved in migration, democracy and politics.

Experts estimate that it has chances of being enacted.  “When it comes to children who were born in Switzerland and whose parents already live in Switzerland, the potential for abuse is low”, von Rütte said.

Kessler, however, pointed out  that “safeguards” would have to be  put in place, “for example an age-appropriate test”.

Naturalisation procedure at the federal level

In Switzerland, naturalisations are done on the grass-roots level: first the commune must approve the candidate, then the canton, and only then does the federal government have its say.

However, Social Democrats have launched a parliamentary initiative to forego the first two steps and have naturalisations done at the federal level only.

This doesn’t seem like a viable alternative, however,  according to Kessler. “Switzerland is built up from below up. If Bern were to suddenly decide who should be naturalised in a municipality, this could meet with resistance. Communities can’t be deprived of this autonomy”.

Kessler and von Rütte  both told the Watson that Switzerland is becoming more open to naturalisation issues.  “The mood towards migrants is much more positive than it was ten years ago. The debates about crime have come to an end; at the moment we are more likely to be discussing the lack of skilled workers”, Kessler said.

READ MORE: What does being ‘successfully integrated’ in Switzerland mean?

What types of naturalisations are currently in place in Switzerland?

There are two types: the simplified naturalisation process, which is open to foreign spouses of Swiss citizens or third-generation foreigners.

Everyone else has to go through the regular citizenship procedure.

However, as The Local explained on March 22nd, the simplified process is not that simple.

On the plus side, the procedures are faster and cheaper, and there is no need to go through all the steps required for ‘ordinary’ citizenships, including taking a difficult test.

But among the required conditions, it must be established “in a probable manner” that at least one of the applicant’s grandparents was born in Switzerland or that he or she acquired a right of residence in Switzerland.

“Imagine that you have to find this in undigitalised document of your deceased grandmother”,  said Walter Leimgruber, chairman of the Federal Migration Commission.