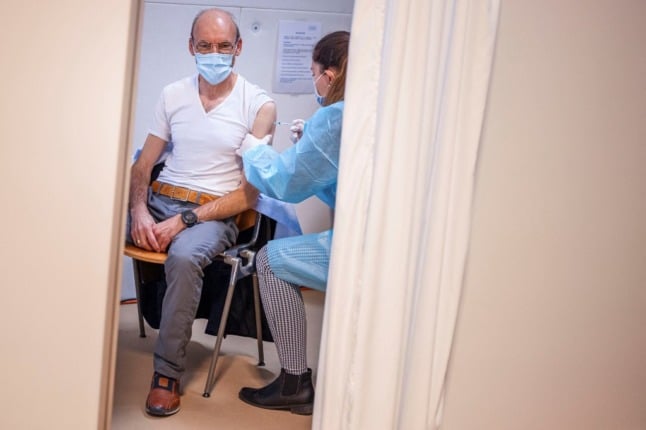 Switzerland hasn’t decided when to give booster shots. Photo by Valentin FLAURAUD / AFP

When it comes to post-vaccine immunity, many questions arise but few can be answered with any degree of certainty.

One of these questions is: when will the booster shot become necessary and is Switzerland ready to administer it?

Switzerland has indicated it is investigating how to implement booster shots at a federal level, while they’ve already begun in one canton.

Does Switzerland have a firm strategy in place?

At two doses per person, this means there are sufficient doses for roughly 13 million people — the entire 8.7-million population, plus enough left over for boosters.

In June, Health Minister Alain Berset said that the vaccine is effective in protecting against coronavirus for a year. This means that for people who got their shots at the beginning of the inoculation campaign in January, the immunity may be declining soon.

While Israel already started giving boosters to people over 65 and Germany will begin to do so in September for the elderly, Switzerland has been slow in deciding when to start.

According to Virginie Masserey, head of FOPH’s infection control unit, this is a very small group of people.

At the end of August, the FOPH indicated it would recommend booster shots be expanded to broader high risk groups and older people, with some health experts calling for them to be rolled out in October.

Which cantons are administering booster shots in Switzerland?

As it stands, information on booster shots is known only by the cantons and has not been shared with federal authorities.

The canton of Basel-City already started administering booster shots to residents with a particularly weak immune systems on August 6th.

As at August 11th nine people have received a third booster shot, but no further data has been released.

Since then, several other cantons have followed, including Bern, Zurich, Solothurn, Zug, Schaffhausen, Thurgau and Aargau.

Blick said the majority of cantons that were asked were already administering booster shots, although the newspaper did not indicate which cantons had been asked – and which had not.

Like in Basel, these booster shots have been targeted at people in high-risk categories.

“The purpose of a third vaccination is to build up good vaccination protection in immunocompromised patients” a spokesperson told Blick.

Zurich has already vaccinated 40 people a third time, Blick reports, with those who have a “severe lack of immunity” targeted.

“The purpose of a third vaccination is to build up good vaccination protection for weakened patients,” said Jan Fehr, infectious agent and professor at the University of Zurich.

“Such third vaccinations for immunocompromised people are not a booster, but a completion of the basic vaccination.”

When will the general public get a booster shot in Switzerland?

While concrete plans are not yet in place, it looks likely that booster shots will be made available in late autumn.

As The Local reported, government said that “in order to ensure sufficient protection in the longer term, booster vaccinations for certain population groups or those already vaccinated will probably be necessary from next winter at the earliest.”

However, on August 3rd, the government said it was still in the process of drawing up plans for a booster vaccination, saying that exactly who would receive it and under what circumstances was to be determined.

“We are looking at the scenario where Switzerland starts with a third dose in the fall, Masserey said, adding that “this decision must be taken on the basis of clear and proven facts. Israel’s is based solely on observations. We are awaiting scientific data”.

However, former FOPH director Andreas Faller warned that Swiss health officials should not take too long to decide on the booster strategy.

“We need to learn from our past mistakes and take the data coming out of Israel seriously. We cannot afford to waste precious time once again”, he said.