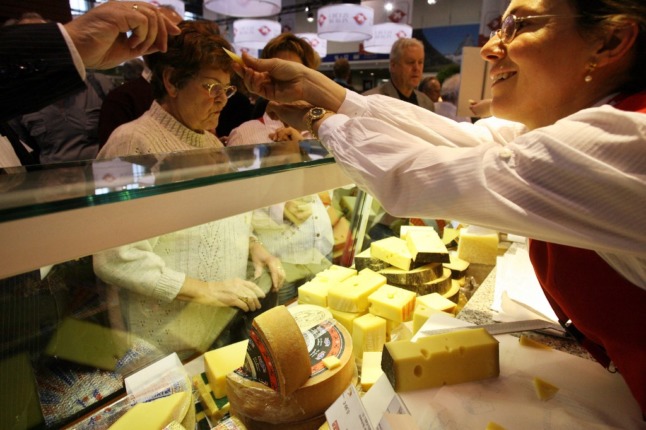 In 2020, the Swiss spent a chunk of their household money on – that else – cheese. Photo by JOHN MACDOUGALL / AFP

Federal Office for Agriculture (OFAG) said it is considering banning advertising of discounted meat, because these products are not favoruable to sustainable consumption and do not correspond to the real value of meat products.

“The discounts on meat are not conducive to sustainable consumption”, OFAG’s’s deputy director Adrian Aebi said in an interview.

Consumer groups have no objection to restricting advertising on meat, as long as safeguards make it possible to avoid throwing away merchandise.

Meat industry association Proviande, on the other hand, said the government should not interfere in consumer affairs.

About 20 million cubic metres of rocks are on the verge of collapsing over Kandersteg, a high-altitude resort village in the Bernese Oberland.

The snowy winter and the abundant precipitation this summer have “enormously accelerated” the speed with which the mountain is moving towards the valley, according to Nils Hählen, head of the Department of Natural Hazards of the Canton of Bern

This phenomenon is triggered by climate change in the Alps, causing glaciers to melt and permafrost to thin out. A new study by the Federal Statistical  Office, the Household Budget Survey. compares how the spending habits of Swiss consumers changed during the pandemic in 2020 as compared to the same period the previous years.

The data shows that the average spending on meals in restaurants, cafés and bars fell sharply in the second quarter of 2020, while consumer expenditure on food increased sharply.

During this quarter, households spent 693 francs per month on average, 78 more than in previous years. In particular, they spent more on milk, cheese and eggs (100 francs against 86 francs previously) and on vegetables (96 francs against 78 francs).

A new phenomenon: the French are shopping in Switzerland

Even though prices in Switzerland are higher than in France, more French consumers are crossing the border to go shopping in Geneva — a reversal of the usual practice where the Swiss go shopping in France to save money.

That’s because in France, 11 departments are now requiring the health pass  to enter shopping centres. This the case also in Haute-Savoie, which is adjacent to the Lake Geneva area. No such measures are in place in Switzerland at the moment.

Not only the retailers, but also bars and restaurants on the Swiss side of the border have seen the influx of French customers,

As a thank-you, “we should send a bottle to Mr. Macron”, he added.

If you are a math fan, you will be happy to know that Swiss researchers had calculated the mathematical constant pi to a new world-record level of exactitude, hitting 62.8 trillion figures using a supercomputer.

“The calculation took 108 days and nine hours”, the Graubünden University of Applied Sciences said in a statement.