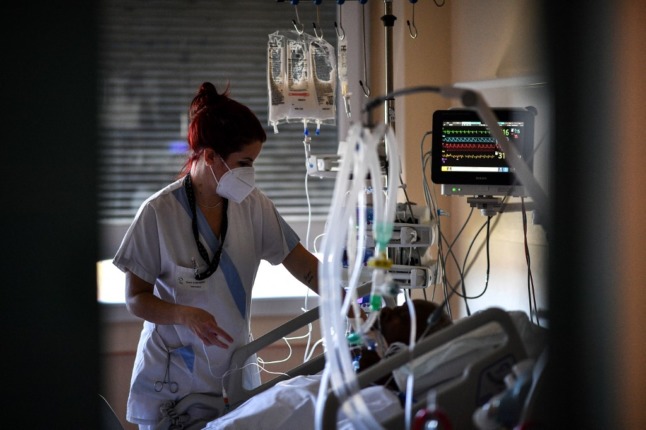 Things are getting worse in Switzerland, although almost all new infections are among the unvaccinated. Photo by Photo by Anne-Christine POUJOULAT / AFP)

This spike is particularly strong among young people, including children.

Figures from the Federal Office of Public Health (FOPH) indicate that between August 2nd and 8th, the increase was the greatest among those between 20 and 29 years of age — 3,056.89 cases for 100,000 people.

As The Local reported in July, “the fact that this age group has been hardest hit is perhaps not surprising, considering they have some of the lowest rates of vaccination”.

By contrast, those from 70 to 79 and over 80 have the lowest rate of infections — 522.28 and 718.81, respectively. Health authorities believe this is because older age groups have been vaccinated at a higher rate than younger people. At the same time, hospitalisations are on the rise as well.

As an example, at the beginning of July, there were two to three coronavirus-related hospital admissions per day. Currently, the number has increased tenfold, according to Patrick Mathys, head of FOPH’s crisis management section.

“A new wave is looming. It’s tragic, and we don’t know how to stop it”, Nicolas Müller, Chief Physician at the Infectious Diseases Clinic at Zurich University Hospital, said in an interview.

Why are the infections soaring at this pace?

According to Müller, holidays play a big role: “Right now, we treat a lot of vacationers returning from travel”, he said.

This is in line with a finding in July, when contact tracers in Zurich saw that half of the canton’s contaminations were detected among tourists, especially those returning from Spain, but also from Greece.

Can this trend be still turned around?

Health experts say it is possible, but only if more people get their shots.

Right now, more than 50 percent of the Swiss population is fully vaccinated, inching closer to the European Union’s average of 54 percent.

However, this rate is still not high enough to protect most of the population against the highly infectious Delta variant that has spread across the country, now accounting for 98 percent of all coronavirus cases in Switzerland.

The evidence clearly shows that vaccination is the most effective measure against Covid.

“It’s simple: we have almost no vaccinated person in intensive care, because vaccination protects very, very well against severe forms of the disease”, Müller said.

As reported by The Local earlier in August, of the 4.2 million people to have been vaccinated against Covid, there have been 460 confirmed cases. In total, 96 people have been hospitalised and there have been 19 deaths – 18 of which were above 80 years of age.

UPDATE: What is the risk of catching Covid and getting sick in Switzerland if you are vaccinated?

Could new restrictions be implemented in view of the worsening epidemiological situation?

Right now, Switzerland is not considering new measures to curb the pandemic, aside from urging more vaccinations.

However, that may change if there is no improvement — that is, if the numbers of infections continue to soar to the point that the healthcare system becomes overburdened.

“If we are to get everything back to normal, the vaccination campaign must speed up considerably. Otherwise, Swiss hospitals risk being overwhelmed again”, Müller pointed out.