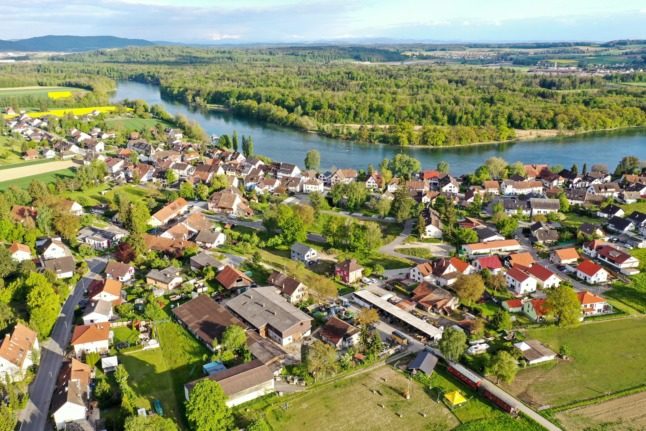 The evening sun beats down on the German town of Büsingen am Hochrhein. Crossing the river across from this little town will take you into Switzerland. Photo: picture alliance/dpa | Felix Kästle

How can a town be in two countries at once?

Similarly Büsingen also fits the definition of an exclave with regards to Germany: a portion of a territory which is separated from its main part by the territory of another state (or states).

As for how this territory works logistically, Büsingen am Hochrhein is politically part of Germany, specifically the federal state of Baden-Württemberg, with German laws and government, but economically (and emotionally) it’s very much Swiss. As with Switzerland as a whole, the enclave operates separately to the European Union.

Büsingen am Hochrhein is a popular tourist destination for both German and Swiss nationals, as well as those from further afield. Its location near the Rhine, proximity to sightseeing opportunities (such as the Rhine Falls near Neuhausen am Rheinfall) and combination of cultures all encourage visitors to the quaint, intriguing town.

The strange course of history

This binational town arose through a quirk of history.

Originally, in 1693, this area belonged to neither Germany, which did not exist yet, nor Switzerland, and was instead under Austrian control. After various dramas spanning decades, including religious feuds and the imprisonment of the feudal lord of Büsingen, Austria, held onto Büsingen even when selling other areas they held at the time to Zürich.

The change to German leadership occurred later in the 19th Century, when Germany took over parts of the Austrian Empire, Büsingen included.

A referendum was held in 1918, in which a vote to leave Germany was won by a whopping 96 percent. In reality, though, Germany was reluctant to let go of the town if Switzerland offered nothing in return.

And so the enclave reached something of an impasse, with Büsingen remaining part of Germany throughout World War Two, albeit with complicated border logistics. This led to agreements being consolidated in 1967, in which border controls were relaxed and Büsingen included into the Swiss customs area.

How does this impact residents?

The town has about 1,450 inhabitants, and everyone has to navigate life in a binational area, with its challenges as well as unique attractions.

As the town aligns with Switzerland economically, Swiss francs are typically used in commerce. Many residents also work in the nearby Swiss towns and Swiss VAT is applied to purchases in Büsingen. While many of the residents of Büsingen am Hochrhein say they feel Swiss, they have to abide by a number of German laws – as well as paying the (significantly higher) German tax rate. Photo: picture alliance / dpa | Patrick Seeger

However, everyone must pay German income tax. Despite attempts to make living in Büsingen more accessible and affordable, for example through the Büsingen tax exemption, taxation still seems to be one of the main issues facing the smooth running of Büsingen’s dual nature.

In comparison to those in neighbouring Swiss areas, younger working residents of Büsingen pay around double the amount of income tax. This has driven many to seek residency elsewhere, leaving Büsingen with a majority ageing population.

READ ALSO: REVEALED: How much do employees really earn across Germany’s states?

Other quirks of Büsingen’s duality include aspects of education, leisure, postage and even football. There’s a local German primary school for children to attend, but after that families must decide in which country the child should go to high school.

In terms of football, the local team FC Büsingen is the only German team able to take part in the Swiss Football League!

Restaurant Waldheim is a perfect depiction of the two worlds, with a line painted across the outdoor terrace to represent the international border. You can be having dinner and drinks in Germany with your friends in Switzerland!

Fancy a taste of Swiss life in Germany?

An attractive destination for holidaymakers looking for something a little bit different, Büsingen am Hochrhein could be a great option – especially for anyone who’s too indecisive to decide between a sojourn in either Switzerland or Germany.

READ ALSO: Holiday like a local: Five of the best camping regions in Germany

Visitors to the town can expect to enjoy its unique charm and find plenty of opportunities to immerse themselves in local culture. Nature lovers can get away from it all with a hike along the romantic, meandering Exclave Trail, before heading back to a historic hotel such as the Alte Rheinmühle, which sits on the waterfront across from the Swiss border.