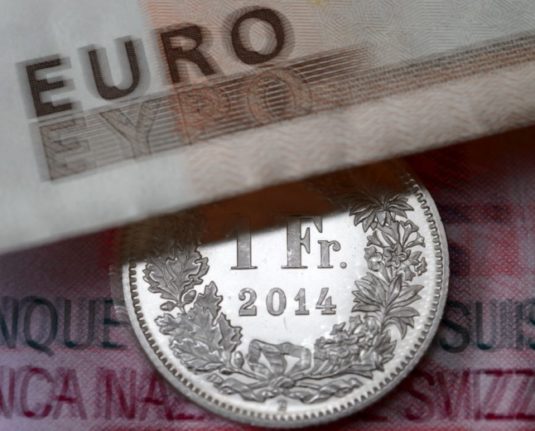 Franc is high against the euro. Photo by Fabrice COFFRINI / AFP

No surprise here: Switzerland got a bit more expensive

Figures indicate an increase of 0.2 percent compared to July, and of 0.9 percent over the past 12.months.

Prices went up in particular in rents, housing costs in general, as well as in air travel.

By contrast, medications and rental cars got less expensive.

Swiss franc climbs against the euro

However, the strength of the Swiss franc is controversial within the business and corporate world. For the Swiss National Bank (SNB), the Swiss franc is no longer “massively” overvalued, but is still “highly” valued, according to the current assessment.

That is the reason why the SNB has deliberately weakened the franc in recent years and was careful not to appreciate it too much within a short period of time.

That’s because a strong franc hurts Switzerland’s economy, which relies heavily on exports —  particularly pharmaceuticals, machinery, instruments, and watches. Over 40 percent of the country’s production is sent to its main trading partners in the European Union.

But when the franc rises, it makes Swiss products less competitive — that is, too expensive — in eurozone markets.

Members of the National Council and Council of States will be able to access the parliament building for the autumn sessions starting on September 13th without a Covid certificate, even if the immunity pass becomes obligatory by then.

The parliamentary services department justified this decision by saying that “a certificate access at political assemblies of the legislature is inadmissible, since the constitutional rights and obligations of council members and magistrates would be restricted too much”.

However, the administrative delegation continues to recommend that unvaccinated council members and session participants have themselves tested regularly.

As before, Covid-19 tests will be offered in the parliament building.

READ MORE: When will Switzerland decide whether to enforce the Covid certificate in restaurants?

There is apparently a problem in Switzerland — apart from the Covid pandemic — that has mobilised the government into action: the incorrect treatment of aquarium fish kept in private households.

Together with Swiss animal welfare organisation and fish protection associations, the Federal Food Safety and Veterinary Office (BLV) has launched a campaign to raise awareness of Switzerland’s population about the right way to keep and treat the fish.

“Aquarium fish are sensitive, socially intelligent creatures capable of learning. Keeping them while respecting their needs is not easy: it is therefore necessary to have in-depth knowledge of the specific needs of the species, the quality of the water, the dimensions and the arrangement of the aquarium, the feeding and the socialization”, BLV said in a press release, urging aquarium owners to learn about the proper upkeep of their fish.

From now until October 14th, Switzerland’s population has an opportunity to select their digital identification from among three possibilities offered by the government.

The first solution consists of “self-managed identity”, where the user has all the control, and data protection is ensured.

The second is based on a public key infrastructure. The system is already used by the government to secure passport data equipped with a chip. The data is decentralised, but must be transmitted in its entirety. In addition to the government, private companies from a controlled  group could also issue the e-ID.