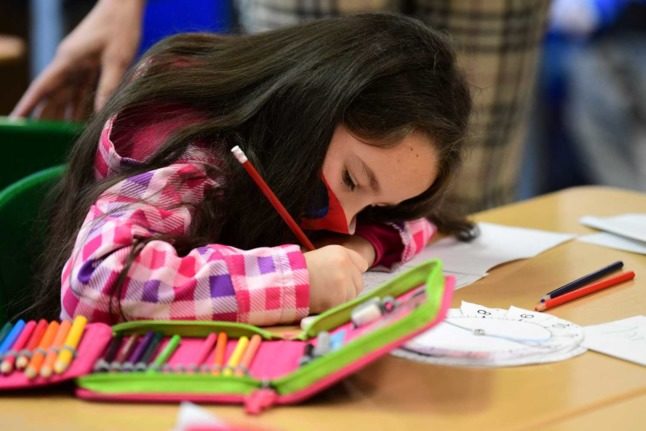 A child in a lesson wearing a mask. Switzerland will vaccinate people as young as five after the Pfizer/Biontech vaccine's imminent approval. INA FASSBENDER / AFP

Swiss vaccine taskforce boss Tanja Stadler said on Monday that Covid vaccines will soon be approved for children between five and 12 years of age.

New data on the safety and effectiveness of the Biontech/Pfizer vaccine has been made available to Swiss vaccine regulator Swissmedic.

While children tend to have a milder course of the virus than others, particularly elderly people and those in high risk categories, in some instances Covid infection can lead to serious illness and even death.

“Biontech / Pfizer has provided preliminary data for five to eleven year olds that are due to be submitted for approval soon. The virus is much less dangerous for children than for the elderly. Nevertheless, there are also severe courses and long covid in children.”

In addition, vaccinating children is seen as a key step in achieving herd immunity, as well as preventing continued outbreaks in the country’s schools.

Currently, both the Biontech/Pfizer and Moderna vaccines have been approved for teenagers aged 12 and up since July.

Stadler, who said she would vaccinate her own children as soon as this was approved, said this was essential in ensuring the country returns to normality.

COMPARED: How Covid vaccination rules for children differ around Europe

“The vaccines are safe, effective and recommendable. I rely on the judgement (of Swiss medic),” Stadler told Swiss news outlet Blick on Monday.