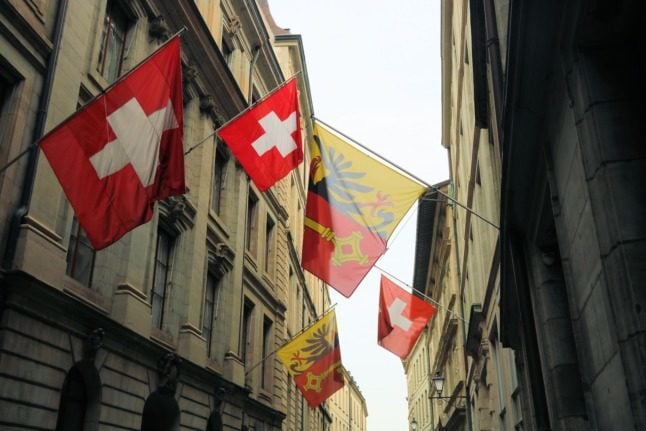 Switzerland has several names but only one flag, here in Geneva’s Old Town. Photo by Philipp Potocnik on Unsplash

The English name for Switzerland comes from the German ‘Schweiz’, which is also known as Suisse in French, Svizzera in Italian and Svizra in Romansh – the other official languages of Switzerland.

But where did that name come from? As far as we know, has its origins in events that shaped its history throughout many centuries. Is it possible that Helvetic tribes that inhabited this land long ago picked the name at random and then voted on it in a referendum?

We cannot know that for sure (especially the referendum part, as direct democracy is a more recent development), but here is what we do know: this name wasn’t just picked out of a helmet.

The theories are many and varied, with nobody quite sure exactly where the name came from.

Where did Switzerland get its name?

It appears that there are as many theories about the origin of Switzerland’s name as there are names for the country.

As Wikipedia tells us, the name might have derived from the Celtic word “Sveit” as early as in year 972. The name ‘Schweiz’ was first mentioned in a legal document in 1415.

Another version has it that the country’s Germanic name, Schweiz, is based on Schwyz, one of the three cantons that in 1291 formed the nucleus of modern-day Switzerland (and remains a canton to this day). The thirteen cantons which formerly made up the Swiss Confederacy. Image: Wikicommons

But that’s not all. Documents from the 15th and 16th centuries suggest a link with Suit / Swit / Schwyt / Switer,  a leader of a tribe that migrated here from Sweden — which could explain why some people think Sweden and Switzerland are the same country (spoiler alert: they are not).

However, yet another historical record suggests that the name originates from “Switzer”, an “obsolete term for a Swiss person which was in use during the 16th to 19th centuries”.

In the very least, this explanation would give the English-language version of the name, Switzer-land, some credibility.

Historians have given perhaps the most credence to this explanation, with some arguing that the term Swiz or Switz was actually an insult for the armies which came from the regions of modern day Switzerland used by armies from modern day Germany and Austria.

Initially, the frequently victorious Swiss armies – remember this was long before Swiss neutrality – hated this word, but began to call themselves Swiss out of spite.

Over time, the name caught on and the insult value diminished, until 1803 when the Helvetic Republic was officially named the Swiss Confederation.

Let this be a lesson to anyone who doesn’t like their nickname or feels insulted by what someone calls them – you can embrace it and use it against them, like a clever judo move.

One country, many names

What about the French, Italian and Romansh names for Switzerland?

Since German (or a form thereof) was the only language spoken in the country in the early days, Switzerland  has been called “Schweiz” the longest.

As French and Italian-speaking regions began to join the confederation over the next centuries, they brought their own linguistic versions of the country’s name: Soisses and Suysses were the early French names (which eventually evolved into Suisse), while Sviceri / Suyzeri morphed into Svizzera in Italian.

However, throughout many centuries, the country that is now Switzerland / Schweiz / Suisse / Svizzera / Svizra had been known simply as the Helvetic Confederation, or Helvetia.

This is also reflected in other languages, such as Romanian, where Switzerland is known as Elveția. Few foreigners are aware that Helvetia / Helvetic Confederation and Switzerland are one and the same country, though hopefully many more know that Switzerland and Sweden are not.