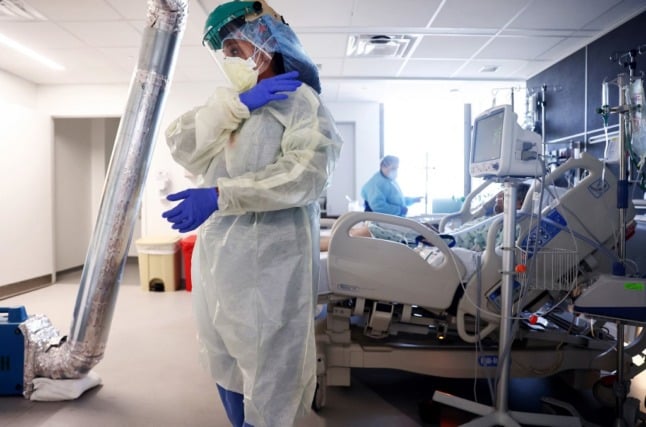 Though the number of infections is climbing in Switzerland, ICUs are not overcrowded at the moment. Photo by MARIO TAMA / AFP

For a while, it looked like the pandemic was under control, with the number of infections, hospitalisations  and deaths dropping steadily in September after reaching its peak — over 3,000 new cases reported each day — in the summer.

Numbers gradually decreased to below 1,000 cases daily — a decline attributed mainly to increasing vaccination rates, driven by the extension of the Covid certificate requirement from September 13th.

But they started climbing again in mid-October, with 2,607 new cases reported on Wednesday November 3rd.

“The general trend is on the rise”, Virginie Masserey, head of the infection control section at the Federal Office of Public Health (FOPH) said in a press conference on November 2nd.

Why is the number of infections rising?

While it may be disheartening to see the epidemiological situation worsen after having improved for a while, it is not altogether surprising.

In fact, Swiss health experts warned that this would happen.

Patrick Mathys, head of FOPH’s crisis management section, pointed out that the number of cases will go up as soon as colder weather sets in, driving more people indoors, where the virus circulates and contaminates more easily.

READ MORE: Covid-19 in Switzerland: The situation is improving, but will it last?

A similar situation happened in 2020, when numbers increased sharply in October, leading to a new wave in the fall and winter.

At the same time, the rate of vaccinations has slowed down by 30 percent, according to FOPH.

Switzerland’s vaccination rate lags behind its neighbours as well as the EU average.

To boost the vaccination rate, Switzerland has launched a vaccination offensive for November, the centrepiece of which is a vaccination week to take place in mid-November.

Events to encourage vaccinations will take place across the country, including in Zurich where a ‘vaccination village’ will be built.

Where are Switzerland’s new Covid hotspots?

As this FOPH map shows, most contaminations have been reported in eastern and central Switzerland, where the infection rates exceed the national average of 245.67 cases for 100,000 inhabitants. In all, nine of Switzerland’s 26 cantons have infection rates that are higher than national average.

These are also the regions with the lowest vaccination rates, which fall below the Swiss average of 63.80 percent of fully immunised adults (that number is 72.59 percent if those from the age of 12 up are included in the statistics). As far as Covid-related hospital admissions are concerned, the rate is highest in central cantons of Glarus, Uri, and Nidwalden, as well as Schaffhausen in the north. In these cantons hospitalisation rates are more than three times higher than the national average of 3.72 per 100,000.

However, on the positive side, ICUs are not close to being saturated for the time being.