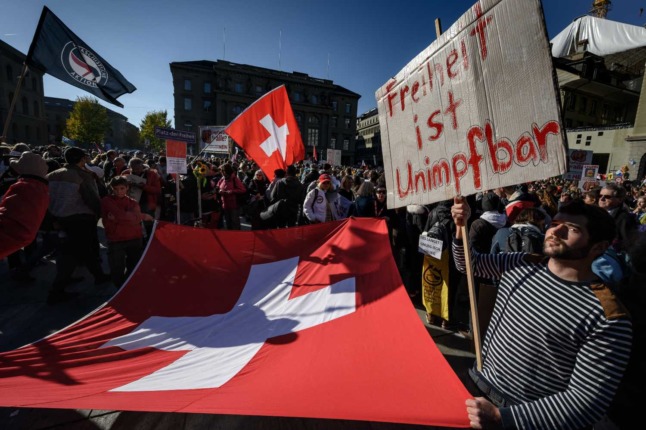 Not everyone who is unvaccinated is a Covid sceptic, although foreigners have a much lower rate of vaccination. Photo: Fabrice COFFRINI / AFP

Foreigners in Switzerland are vaccinated at a lower rate than their Swiss-born counterparts, with the rate particularly low among immigrants from Balkan states.

The rate of unvaccinated people among immigrants from southeastern Europe is almost twice as high as for Swiss citizens.

A new survey carried out by the Sotomo research institute on behalf of Swiss Broadcasting Corporation shows the reluctance to roll up the sleeves is particularly widespread among people from the Balkans.

What is the vaccination rate of foreigners in Switzerland?

Around 25 percent of Swiss residents are foreigners. In total, foreigners are vaccinated at a lower rate than their Swiss-born counterparts, although the rate of vaccination varies considerably depending on where people are from.

EXPLAINED: How to get the flu vaccine in Switzerland

The Sotomo survey, published on Wednesday, showed that 90 percent of people from North America – i.e. both the United States and Canada – have had both shots, while a further five percent are vaccinated once.

Foreigners from northern Europe have had either one or both doses at a rate of 84 percent, while for German speakers the rate is 76 percent.

79 percent of South Americans have been vaccinated at least once for Covid.

The rate of Swiss-born people who have had at least one dose of the vaccine in the survey is 78 percent.

The rate of people with at least one shot is also low from Africa (66 percent), eastern Europe (65 percent) and southern Europe (70 percent).

The Portuguese too are much less willing to get the jab than their Swiss counterparts, the survey found, which is somewhat surprising considering Portugal’s high rate of vaccination.

In Portugal, 89 percent of people have had one shot, while 87 percent are fully vaccinated.

Why are foreigners reluctant to get vaccinated?

The survey itself did not go into why people may be reluctant to get the jab, although a number of theories have been put forward.

Arber Bullakaj, a Swiss MP born in Kosovo, told Swiss tabloid Blick “the desire to be vaccinated has nothing to do with nationality”.

Many foreigners are less familiar with the Swiss health system and perform a variety of manual jobs, which makes it harder to get time to get vaccinated.

“They therefore had less access to the campaign and are less flexible in their vaccination schedule,” Bullakaj said.

He points out that the age structure of migrants is different from that of the population as a whole. They are younger, and fewer people in this age group get inoculated, regardless of nationality.

He said vaccination campaigns needed to do more to target people in these demographics.

“The authorities’ vaccination campaigns are too little targeted at the working population, young people and migrants, who are disproportionately represented in the first two groups.”

Political scientist Nenad Stojanović, from the University of Geneva, agreed, saying socio-demographic considerations were more indicative of low vaccination rates than nationality as a sole factor.

This may explain why Americans and Canadians in Switzerland are almost completely vaccinated despite these countries having a 66 percent and 79 percent rate of people with at least one shot respectively. Similarly, it may explain the divergence in relation to people from Portugal.

Also, the Sotomo survey found that people with less education and lower income are generally more reluctant to get vaccinated, and many immigrants fall into this category.

SWISS CITIZENSHIP
Naturalisation: How well must I speak a Swiss language for citizenship?
Url copied to clipboard!