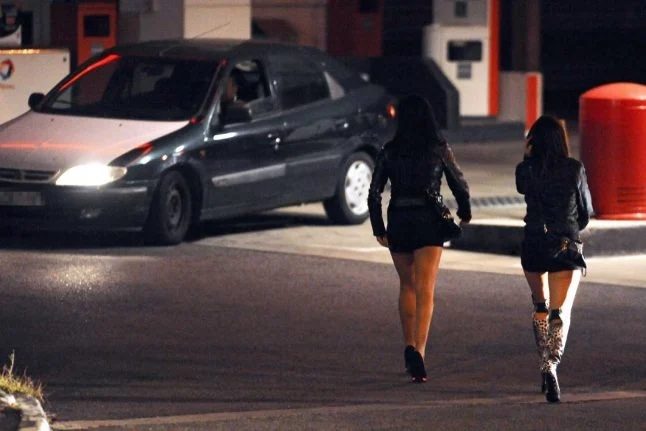 To many prostitutes, getting vaccinated against Covid makes a lot of street sense. Photo: REMY GABALDA / AFP

Switzerland has just completed its Vaccination Week that took place across the country from November 8th to 24th with a goal of encouraging vaccine holdouts to get jabbed.

In order to entice as many people as possible to roll up their sleeves, some sites offered various post-vaccine perks. In Zurich, for instance, free raclette or coffee with pastry was offered on the spot to anyone who got a shot.

But a brothel in Geneva came up with a more original incentive: it offers free oral sex in exchange for the vaccine.

To “thank the vaccinated people for contributing to the resumption of a normal life”, Club Delicious in Geneva is offering this service to anyone who can “present proof of vaccination within the previous three days”, the brothel writes on its website.

This special offer is only valid until November 30th, however.

Though such offers don’t come up too often (officially this is the first), Switzerland’s sex industry in general has been rigorous in applying heath rules during the pandemic.

For instance in May 2020, the association representing Swiss sex workers presented a health plan, with measures such as ventilation of rooms for at least 15 minutes after each customer visit, use of gloves, condoms and disinfectants, and adopting training and information campaigns to further reduce the risk of infection.

The association also said visits would be kept to a maximum of 15 minutes and kissing – which was already rare before the lockdown measures came into place – would be actively discouraged.

Additionally, contact data – including names and phone numbers – would have to be provided by each customer.

And the protective measures included a list of sex positions which minimise the risk of spreading the coronavirus.

The following month, the owner of a brothel in Zug said a number of changes in his establishment had been adopted as well, including the ‘no oral sex or older men’ rule — since men in this age group were more likely to catch Covid — as well as the emphasis on “less sexual intercourse and  more on body massages”.

Because of these rules, the country’s brothels, which were shut down during the six-week confinement like many other businesses — were allowed to reopen on June 8th, 2020.

The Covid certificate is not required in brothels, the same way as it is not compulsory in other personal wellness services like beauty salons or hairdressers. Service providers don’t have to be vaccinated either, although they do have to comply with protective measures like masks.

However, in August 2021, a directory of independent escorts, bemygirl.ch, has created a pictogram to highlight its members who have Covid certificates, so that customers can choose accordingly.

In presenting the workers who have been vaccinated, the company “continues its quest for transparency towards the public and adds a vital piece of information in an environment where contacts are inevitably direct and close”, bemygirl said on its website.

Must all sex workers in Switzerland be vaccinated?

From the very beginning of the vaccination campaign in January 2021, the government emphasised that vaccines, though strongly recommended, are not compulsory and nobody can be immunised against their will.

This rule also extends to prostitutes as well brothels, which can’t require its sex workers to get the jab.

READ MORE: Can your boss require you to have a Covid certificate in Switzerland?

What legal status do sex workers in Switzerland have?

Prostitution has been legal in Switzerland since the 1940s and is considered a legitimate service industry, whose members pay taxes, contribute to their Social Security fund, and must take up health and accident insurance the same way as any other self-employed person.

The Swiss have taken this pragmatic approach to prevent exploitation, sexually transmitted diseases, links with criminal networks and other problems common in countries where sex commerce is banned.

But unlike their counterparts in other sectors, they must register with public health authorities and undergo regular health checks.

There is no stigma attached to sex work in Switzerland, as long as it is practiced legally.

In fact, in some disputes, authorities have been known to side with prostitutes rather the so-called “law-abiding” citizens.

One such case happened in the Thurgau town of Arbon in 2018, where several residents wrote a letter to city officials, complaining about the sights and sounds emanating from a local  brothel, asking authorities to shut it down.

But the municipality responded that the brothel will be allowed to operate because of the valuable service it provides. “This establishment has a right to exist, as it fulfils the social need of the population,” officials said.