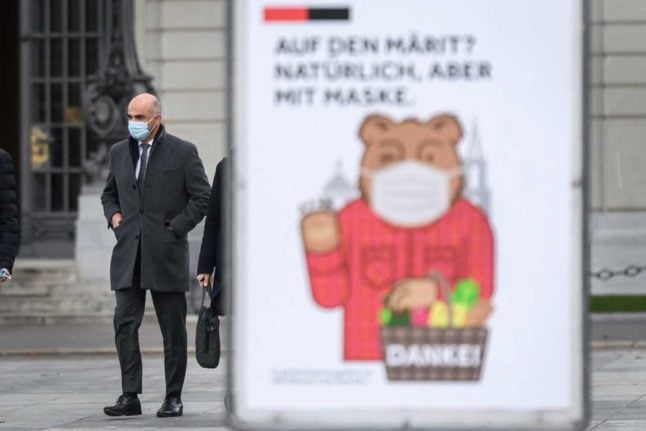 On Wednesday, January 19th, the Swiss government announced a range of changes in the way the country is handling the Covid pandemic.

Many of the existing Covid measures were extended, while there have been changes in testing and quarantine rules.

Further easing of Covid measures will next be discussed by the government on February 2nd.

Covid in Switzerland: ‘It is possible that we’ve reached the peak’

Extension of measures until end of February

The government decided to extend the measures currently in force, such as the 2G regulations and the obligation to work from home.

All measures have been extended until the end of March, other than the working from home obligation which will expire at the end of February.

Last week, the Federal Council shortened the duration of quarantine and isolation to five days.

While two-thirds of the cantons wanted to abolish the preventive quarantine for contact cases altogether, the government decided it would be extended until the end of February.

“The quarantine therefore makes an important contribution to preventing people from spreading the virus, for example at work,” the government said in a press release.

READ MORE: Should Switzerland abolish quarantines and roll back testing for Covid-19?

The Federal Council also announced a reduction of the validity period of the certificate for vaccinated and recovered people from 365 to 270 days.

This would allow Switzerland to align with European Union’s rules and ensure that the Swiss certificate is accepted in the EU, which is essential for travel.

People arriving in Switzerland will not need to show negative tests on entry from January 22nd onwards, provided they are vaccinated or recently recovered.

Unvaccinated and unrecovered people will still need to provide a test on entry.

In effect, this means that the 3G rule applies to all entering Switzerland.

The entry form rules have also been relaxed, with only those arriving on planes or long-distance buses needing to fill out the form.

A shortage of PCR tests in Switzerland has led to a change in the way these tests are prioritised.

This is done by a step-by-step prioritisation, as laid out by the Federal Council below.

“Due to the high demand for tests and stretched laboratory capacity, the Federal Office of Public Health will recommend to the cantons a new list to prioritise the handling of PCR tests:

1. People at high risk with symptoms or who have had contact with someone who has tested positive

3. Pool tests in critical infrastructures (defined by the cantons)

6. Pool tests in the workplace

7. Tests for professional or private travel (if PCR test required)

8. Tests upon request (to obtain a test certificate)

In order to further relieve pressure on PCR testing capacities, it will be possible on a temporary basis from 24 January to obtain a Swiss certificate proving recovery from COVID-19 based on a positive rapid antigen test. This will then be valid for 270 days and only in Switzerland.”

Due to the PCR test shortage, people who test positive on an antigen test will now be entitled to a Swiss Covid certificate (for 270 days).

Previously, this needed to be a PCR test. Self-tests do not apply, i.e. the antigen test must be done at a pharmacy, hospital or other testing facility.

Further tightening or loosening of measures

Although the Federal Council said it would order stricter measures, including closings, quickly if the hospitals and intensive care units become saturated, for the moment such drastic measures are not on the horizon.

Further easing or tightening of Covid measures will next be discussed by the government on February 2nd.

READ MORE: Swiss government: Omicron may be ‘beginning of the end’ of pandemic