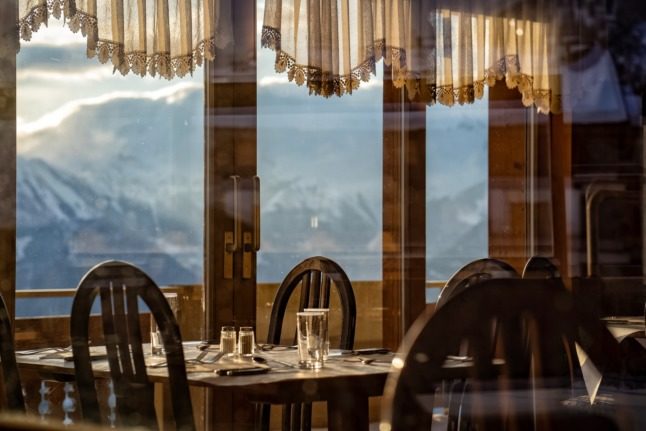 Hotels and restaurants in Switzerland were affected by the pandemic, while other sectors did relatively well. Photo by Kinga Lopatin on Unsplash

The Omicron wave has peaked at last, but hospitals still at risk

As the number of new cases has dropped from more than 41,000 infections registered on February 2nd to just over 33,000 by the end of last week, the downward trend “is undeniable”, according to epidemiologist Andreas Cerny.

Rudolf Hauri from the Conference of Cantonal Health Directors also said this trend “is clear and observable everywhere”.

This chart from the Federal Office of Public Health (FOPH) confirms that number of cases is falling.

However, the healthcare system is not out of the woods yet, Cerny warns. “If the virus spreads extremely quickly after all measures are suddenly lifted, this could still lead to overloading of hospitals”.

For its part, FOPH also expects “a significant additional burden of the disease” to linger on, according to minutes of a meeting held on Friday.

Many more Covid deaths among foreigners than Swiss

Significantly more foreign nationals died during the pandemic than their Swiss counterparts, based on data from the Federal Statistical Office (FSO).

The results are “extremely clear”: among Swiss citizens aged 65 to 74, the increase in deaths in 2020, when compared to 2019, was 2.2 percent, while it was 20.9 percent among people of the same age without a Swiss passport. In the other age groups as well, the increase was drastically higher.

This higher mortality is believed to be due to the social and economic disadvantages faced by many foreign nationals, such as tighter housing, jobs without the possibility of teleworking, and dependence on public transport — all of which increased their exposure to the virus.

In her recent remarks regarding the possibility of Russian invasion of Ukraine, EU deputy Nathalie Loiseau said that Europe can’t ignore the impending crisis “like a big, soft Switzerland”.

By ‘soft’, Loiseau meant to imply that Switzerland is spineless in international conflicts.

“For decades, we have worked for peace and security in Europe and the world”, Swiss Embassy in France has tweeted, adding that the country has always acted “with determination” alongside the EU.

READ MORE: EXPLAINED: Why is Switzerland not part of the European Union?

Despite predictions to the contrary, the pandemic has never “challenged the country’s economic order”, according to Jan-Egbert Sturm, an economist at Zurich’s Polytechnic Institute (ETH).

“We have weathered the crisis much better” than expected by many experts. “There have certainly been painful cuts, but not very big upheavals”, he said in an interview with SonntagsBlick.

Sturm attributes this sturdiness to the “structure of our economy”.

“Important industrial sectors, particularly the pharmaceutical industry, have resisted the pandemic well. Moreover, the measures taken by the Federal Council have never paralysed our entire economy”.

He acknowledged, however, the pandemic has impacted some sectors, particularly the hotel and restaurant industry.

Out of the 1,300 current job seekers in Zug, a relatively high proportion of around 300 people are foreign employees. This is due to the fact that an above-average number of international  companies — mostly in raw materials, chemical and financial services sectors — are based in the low-tax canton.

However, according to a report by public broadcaster SRF, finding a job is more difficult there because most foreigners in Zug are highly specialised in their fields and can’t easily switch from one industry to another.

The canton is now helping unemployed foreigners back into the job market — for instance, by setting up job fairs where job seekers meet recruiters and companies looking for personnel.

“Zug is a very attractive job market, and if we help the unemployed expats, many can gain a professional foothold here again”, according to Gianni Bomio, president of the canton’s Association for Labour Market Measures.

Postfinance,  a financial services unit of Swiss Post, is looking to hire software developers, but only those who  — according to an ad placed on the LinkedIn’s career platform  — “do not devote working hours to the fight for equality”.

Specifically, it seeks employees who want to work out “the difference between 0 and 1 and not between XX and XY” — the former referring to codes and the latter to male and female chromosomes.

While the advertisement was intended to be clever, “with this text, Postfinance is massively devaluing the fight for equality”, said Agota Lavoyer, an expert on sexualised violence.

In its defense, Postfinance responded that its ad was misunderstood.

“The message is that equality is firmly anchored in the culture at Postfinance and is so normal that employees do not have to spend any time on the job thinking about it”, said spokesperson Dörte Horn.

Now is a good time to sell your house

Property prices have skyrocketed in recent months, and a house today costs almost 30 percent more than a decade ago, according to real estate consultancy firm Iazi. And in certain high-demand areas like Zurich and the Lake Geneva region, prices are significantly higher.

Ruedi Tanner, president of the Swiss Chamber of Brokers (CSC) said owners who are selling their properties now “have clearly chosen a good time”.

The demand is such that “in many regions, there are hardly any more offers on the property market”, he added.

When the Italian-speaking canton published its annual statistics recently, many were astonished (and not in a good way) to discover that a small commune of  Riva San Vitale registered 791 crimes in 2021.

This means the crime rate has increased by 1313 percent compared to previous year. “When I read that, I was flabbergasted,” said Antonio Guidali, mayor of the 2,600-resident community.

It turns out, however, that there is no need to rush for bullet-proof vests; according to police reports, only two residents, who committed several hundred cases of insurance fraud, are to blame for the staggering crime rate.