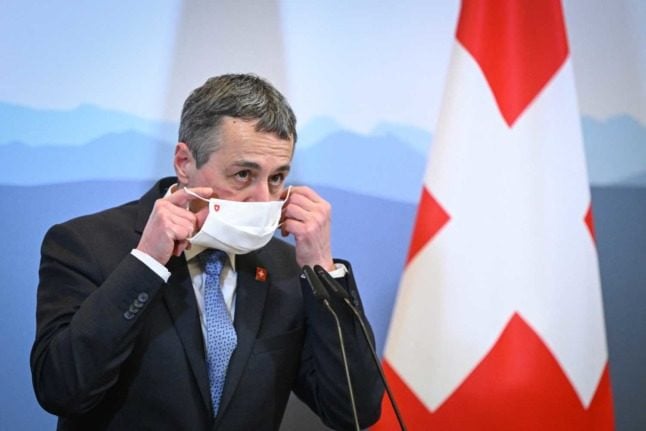 After dropping the work-from-home order and the quarantine requirement for Covid contacts on February 2nd, Switzerland could soon scrap other measures that are still in place.

This step would signal “the beginning of a new phase in the pandemic”, president Ignazio Cassis said, adding that after two years of restrictions, “we see light on the horizon.”

Which measures are likely to be lifted?

The Federal Council is expected to announce one of the two possible exit strategies on Wednesday.

The first one would see the lifting of almost all measures from February 17th, including the requirement to show Covid certificates to enter bars, restaurants, and other indoor venues.

There would also be no further restrictions on private meetings, while large events would no longer have to be authorised.

Some measures would remain in place, including the requirement to isolate if you test positive, along with safety and hygiene plans for all large events.

The government said these measures would fall provided “the current wave of infections passes its peak”, and vaccinations / boosters continue to progress.

The peak seems to have been reached, with the number of new cases dropping by half — from more than 40,000 reported at the beginning of February to just over 20,000 on Tuesday.

However, it is still to be seen whether the downward trend will continue.

The other condition, increase in vaccinations / boosters, has proven more difficult to fulfil, as Switzerland’s immunisation rate of 66.8 percent and booster rate of 40.9 percent still trails the European Union’s average and is not expected to increase significantly at this point.

The second strategy proposed is more cautious than the first, although it would still see the relaxation of several measures on February 17th.

Covid certificates would no longer be required for restaurants, although seating would still be compulsory. The 2G rule – i.e. requiring people to be vaccinated or recovered – would apply wherever the 2G-Plus rule applies (i.e. nightclubs, choirs, swimming pools and saunas and indoor sporting activities).

There would be no further restrictions on private meetings, while large outdoor events would no longer need to be authorised via a permit.

Mask rules would remain in place, along with the isolation rule for people who test positive and the 2G rule for certain venues. These would be lifted in future as soon as the situation allows it.

READ MORE: What are Switzerland’s plans to relax Covid measures – and will they happen

So which path is the Federal Council most likely to choose?

Given the improved epidemiological situation, including fewer Covid-related hospitalisations and deaths, the first one seems a logical choice.

As Blick reported on Tuesday, “after consultation with the cantons, the ‘turbo’ opening is coming”.

“The development in the number of cases as well as in hospital admissions creates confidence. Many measures such as the obligation to obtain a certificate hardly make sense anymore”, Rudolph Hauri, head of Conference of Cantonal Health Directors, told Blick.

“From an overall perspective, it is therefore time to move away from collective measures and focus more on individual, voluntary ones”, he added.

The only question that remains is the obligation to wear a mask.

“Wearing a mask still makes sense where you are together in smaller spaces for a long time. In public transport, for example, the mask requirement should be retained”, according to Hauri.