Will Switzerland host a ‘peace’ meeting between Russia and Ukraine?

The two countries might meet for talks in Geneva soon. This wouldn’t be the first or last time that quarrelling parties try to work out their problems in Switzerland’s most international city.

Please note: Switzerland on Monday afternoon announced it would join the EU in imposing sanctions on Russia. Here's what you need to know.

As reported by Swiss media, Ukrainian President Volodymyr Zelensky asked his Swiss counterpart Ignazio Cassis to organise a peace conference in Geneva in order to bring about a ceasefire with Russia.

The meeting of the United Nations Human Rights Council, scheduled in the city for Monday and Tuesday, in which Russian Foreign Minister Sergey Lavrov is due to participate, would be an opportunity for peace talks.

Switzerland, Russia or Ukraine have not confirmed yet that such a meeting will take place, but Zelenskuy’s request sheds new light on Geneva’s pivotal role in international diplomacy.

In fact, due to its long humanitarian tradition and strategic location in a neutral country — as well as a convenient presence of numerous UN agencies — Geneva has hosted a number of important international summits since the end of World War II (see below).

“Switzerland is a globally renowned and sought-after partner as a mediator in peace negotiations and in supporting mediation and peace processes”, according to the Federal Department of Foreign Affairs (FDFA).

“Mediation is part of Switzerland’s good offices and one of the country’s foreign policy priorities”, the FDFA added.

How do nations settle their disputes in Geneva?

According to the FDFA, “with the agreement of the parties in conflict, Switzerland creates a space for negotiations – it does not take sides or influence the agenda. It helps the parties to identify the root causes, formulate their concerns and work out solutions”.

Switzerland may be requested to act as a mediator by conflicting parties themselves — as is the case with Zelensky reportedly asking the Swiss president to set up such a meeting — or may offer its mediation services. It acts as a mediator itself or offers support to negotiating parties”.

For instance, “Switzerland is increasingly deploying experts in international organisations such as the UN and Organisation for Security and Co-operation in Europe (OSCE), to mediate in conflicts”. 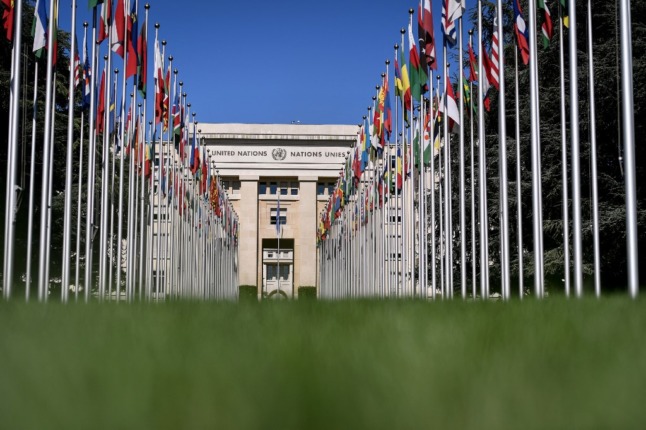 What top-level meetings has Geneva hosted in the past?

Here’s an overview of several of many conferences that have taken place in the city since the end of the war:

Representatives from France, the US, the USSR, the People’s Republic of China, as well as  emissaries from the Viet Minh, met at the Villa Le Bocage just across the street from the UN Geneva headquarters.

After long negotiations they agreed on the provisional partition of Vietnam, and the creation of three new states: North Vietnam, led by the Viet Minh, Laos and Cambodia.

The agreement became known, appropriately enough, as The Geneva Accords.

“Cameras from all around the world were there to capture a historic, seven-second-long handshake between US President Ronald Reagan and USSR leader Mikhaïl Gorbachev in front of the Villa Fleur d’Eau, in the Geneva suburb of Versoix, according to Geneva Solutions publication.

The first meeting between the two superpowers sought to slow down the nuclear arms race. But even though it did not end the weapons race, summit served to renew the dialogue between the two blocs, “initiating a détente in US-USSR relations which would last until the end of the Cold War”. 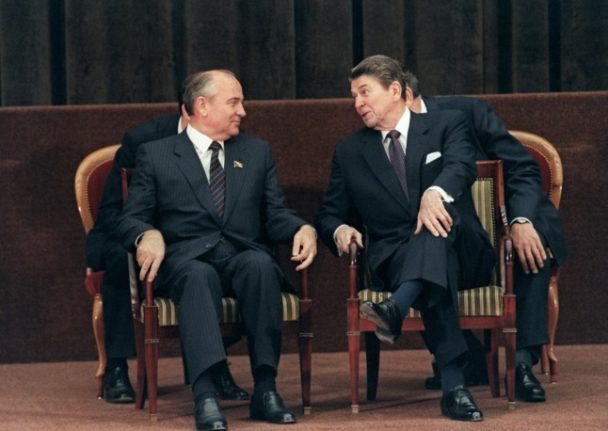 Ronald Reagan and Mikhail Gorbachev during a two-day summit between the superpowers in Geneva. Photo by AFP

Iran, the US, France, the UK, Germany, Russia, China and the European Union met in Geneva’s City Hall to continue peace talks that had already started in 2006.

During the 2013 conference, preliminary consensus was reached, stipulating that the Iranian nuclear agreement would remain solely civilian and will not be used for weapons.

This meeting laid the foundation for the signing of a joint plan of action on  July 14th, 2015. However, “despite these advances, in 2018 former US President Donald Trump withdrew from these agreements”.

In the first top-level US-Russia meeting in Geneva since the Reagan-Gorbachev summit, the two leaders met on a sunny day in Villa La Grange, a luxurious mansion overlooking Lake Geneva. 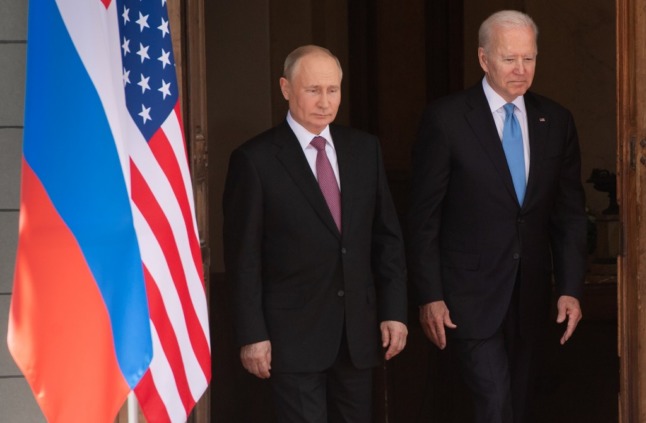 Talks were held amid beefed-up security: around a thousand troops have also been deployed, while the Swiss air force policed the sealed-off skies for up to 50 kilometres around the city.

For other historic meetings in Geneva, see here.