Reader question: Where is my nearest nuclear shelter in Switzerland?

Although the war between Russia and Ukraine is confined to that region of eastern Europe, many people in Switzerland are wondering where to go for safety in a highly unlikely event that the conflict spreads westward.

Even though neutral Switzerland hasn’t been attacked by a foreign power since Napoleon’s invasion in 1798, and wasn’t invaded by Germany in WWII, the country had built enough fallout shelters to protect its entire population — just in case.

Some private houses built before the end of the 1980s have their own bunkers, with a reinforced steel door, ventilation system, anti-gas filter, and enough shelves to stock a two-week supply of water, medications, and non-perishable food.

But in the past several decades the trend has been toward communal shelters. This is what you need to know about them.

How many fallout shelters does Switzerland have?

According to the Federal Office for the Protection of the Population (OFPP), Switzerland has 360,000 shelters. Among them, 5,100 are publicly managed by civil protection, the rest being shelters located in private buildings.

How many people can be accommodated there?

They can accommodate 8.6 million people. Switzerland is the only country in the world that could house practically its entire population in its shelters.

How do you find your shelter?

The cantons are responsible for planning and defining who will be allocated where. “This information is communicated only when the situation requires it,” according to Linda Studer, spokesperson for the OFPP.

When should you go to your assigned shelter?

The government will decide this. It maintains a network of around 7,200 stationary and mobile sirens across the country as a public warning system that would be used in case of a national emergency.

If the sirens go off outside of the annual test held on first Wednesday in February, the population may be in danger.

You should immediately listen to the radio, follow instructions and inform your neighbours, who, for any number of reasons including building soundproofing, may not have heard the sirens.

A notification will also be sent via the free Alertswiss app.

The Federal Office for National Economic Supply (FONES) also advises everyone to keep a transistor radio on hand with spare batteries in case of power cuts. Failing that, use a car radio.

Would the facilities be ready for use?

It is above all the shelters located in private buildings that are currently used for other purposes. This is permitted by law, provided the space can be commissioned for emergency use within 12 hours of the government’s order to evacuate.

What should such a shelter have in case of an emergency?

The law requires toilets, a supply of fresh air and enough cots. Added to this are construction requirements such as the thickness of the walls.

However, there are no requirements in terms of reserves for shelters located in private buildings. In this area, homeowners are responsible for stocking emergency supplies.

FONES recommends that shelters be stocked with nine litres per person of drinking water, as well as non-perishable or long-lasting essentials including rice, canned goods, sugar, coffee, and tea, along with medications, flashlights, transistor radio, and enough batteries.

This is a full list (in German) of supplies needed in shelters for emergency situation. 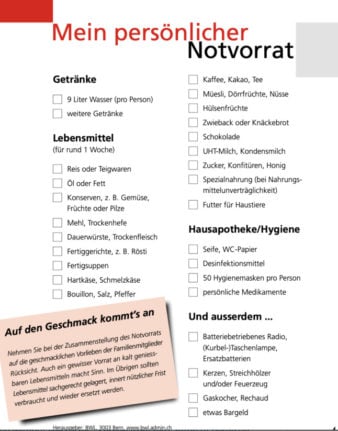 The list in French and Italian can be downloaded from FONES’ website (scroll to the bottom of the page).

This article will remain completely free for everyone as a service to our readers. But our coverage is only possible with our paying members’ support, so if you haven’t yet, please consider joining us to support our independent journalism. Thank you.