Could Switzerland defend itself against invasion?

There is no imminent threat of the war between Russia and Ukraine impacting Switzerland militarily. But Swiss MPs and the government are nevertheless concerned about the country’s safety amid rising tensions across Europe and the globe.

Switzerland is a small, neutral country that has not been attacked by a foreign power since Napoleon came to call in 1798 - the last time Switzerland took part in a war - and it wasn’t invaded by Germany in WWII.

However, the war in Ukraine has revived the debate around defence, the Swiss military and the equipment available to the army: weapons that go far beyond the Swiss army knife — useful mostly in civilian life but so much in combat.

Both chambers of parliament — the Council of States and National Council — will hold an urgent debate on the war in Ukraine on March 15th and 16th, in particular on its impact on Switzerland's security policy in a highly unlikely event that the conflict spreads westward.

The issue of readiness is also a hot-button topic within the Defence Ministry.

In the event Switzerland were threatened by the indirect effects of an international conflict – such as a cyberattack or the abusive use of airspace – “we must be prepared for all risks”, Defence Minister Viola Amherd said in an interview with SonnatgsZeitung.

This concern is tied to many changes that Swiss military has undergone in recent decades.

During WWII, the country was ready for combat, with every soldier armed and able to fight his way to his regiment’s assembly point at a moment’s notice.

Also, the military reportedly booby-trapped all tunnels, bridges and viaducts, and were ready to detonate the explosives if Germany dared to invade.

The readiness, and armed population, continued during the Cold War years, but the “gun in every closet” tradition was challenged in 2001, after a disgruntled citizen opened fire with his army rifle inside a regional parliament in Zug, killing 14 and injuring 14 others.

Then, in 2010, Switzerland scrapped much of its military equipment as it dramatically downsized the armed forces, along with military spending — a trend that had continued in following years.

Even private homes with obligatory fallout shelters to be used in case of an attack were gradually phased out in favour of communal facilities.

READ MORE: Reader question: Where is my nearest nuclear shelter in Switzerland?

Amherd added that she is in favour of increasing military budget by two billion francs to allow the renewal of the air force —the F/A-18s currently in use will be decommissioned by 2030 — as well as to re-equip ground troops.

Although in 2021 Switzerland’s government backed the purchase of 36 F-35A fighter jets from the US to replace the  country’s current ageing fleet, the decision has sparked public criticism and is still under debate. 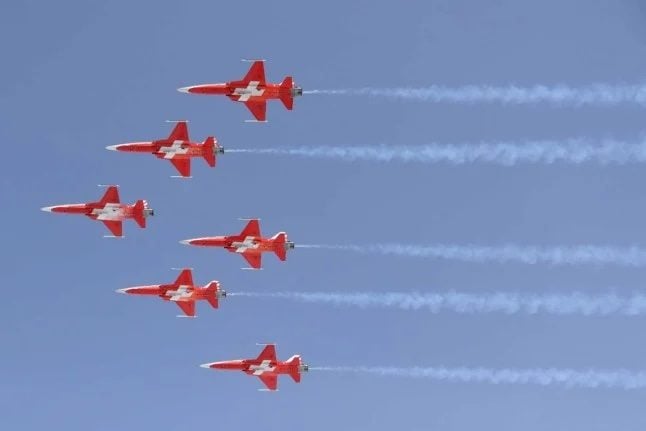 Meanwhile, MPs from two parties — Swiss People’s Party (SVP) and the Liberals (PLR) — are also calling for an increase in military spending.

SVP deputy Werner Salzmann, who is also the chairman of the Commission for Security Policy, explained that the army has to buy bulletproof vests for all soldiers and equip the current fighter jets to make them suitable for ground combat. He also supports reactivating decommissioned tanks. PLR’s Thierry Burkart is asking for more heavy weapons and combat tanks.

However, there is no way to know for sure whether the current equipment and 147,510 troops (including 102,715 rank and file soldiers) could defend Switzerland from attack. That’s because Switzerland has no previous experience in modern times of armed conflict.

If Switzerland were a member of the North Atlantic Treaty Organisation, it would have help of 30 other countries in the alliance in defending itself in case of attack.

However, as a neutral country, Switzerland can’t join a military alliance and risk being involved in an armed conflict.

“As a sovereign and neutral country, we must first and foremost be able to protect ourselves”, Amherd said.

Some experts, however, are calling on the government to reconsider its position.  Stefan Holenstein, president of the National Conference of Military Organisations, said that “armed neutrality is certainly part of Switzerland's identity, but joining NATO could be advantageous for Switzerland's security”.

In any case, the country couldn’t join the alliance even if the government were for it. The issue would be put to a referendum.