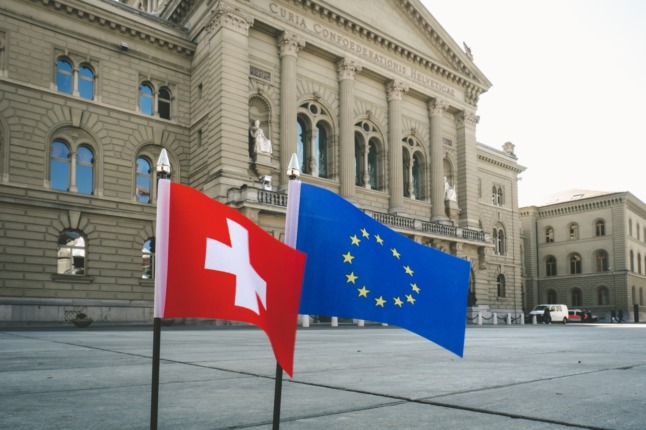 Swiss and EU flags in front of the Parliament building in Bern. Photo by Christian Wasserfallen from Pexels

Will Switzerland have enough fuel next winter?

In view of uncertainties over gasoline supply linked to the Russian invasion of Ukraine, the Federal Council is taking measures to ensure sufficient quantities for next winter, especially as about half of the oil used in Switzerland comes from Russia.

And Switzerland is not part of the solidarity agreements within the EU for the reciprocal supply of gasoline in the event of an emergency.

Among measures being taken by the government is allowing various companies in the energy sector to make joint purchases and obtain additional storage capacity abroad, as Switzerland doesn’t have enough stocking capabilities.

Switzerland has already been doing this “but too little has been achieved in the last ten years”, according to Simonetta Sommaruga, head of the Energy Ministry.

“It is now crucial to accelerate the pace of the transition”, she said.

Switzerland to activate a special entry procedure for Ukrainian refugees.

The Federal Council is opting to activate an “S” status for Ukrainians forced to leave their country. This status would allow them to come to Switzerland for more than 90 days — the current limit within the Schengen countries — and to obtain a right of residence in Switzerland without having to go through an ordinary asylum procedure.

The Federal Council will consult with the cantons on this proposal by the middle of this week before making a final decision.

As to the number of refugees expected to arrive, “we don’t know how many will still leave their country, nor how many will seek refuge in Switzerland,” said Justice Minister Karin Keller-Sutter.

“What we do know is that the numbers will increase significantly in the coming days”.

Most Swiss in favour of reaching a compromise with the EU

Relations between Switzerland and the European Union have been strained since May 2021, when the Swiss abruptly ended negotiations on framework agreements with the bloc.

However, according to a new poll by gfs.bern market research institute, 80 percent of Switzerland’s population is ready to make some concessions, such as adoption of the European law, as long as the right of referendum is not touched.

Similarly, 67 percent of respondents said they are open to accept the special arbitration panel to resolve Swiss-EU disputes and file appeals with the European Court of Justice, which has long been a contentious issue in Switzerland.

“For a majority of the population, the question of recourse to European judges is not considered as an insurmountable obstacle in relations with the EU”, according to Urs Bieri, co-director by gfs.bern.

READ MORE: Swiss call for ‘calm and creativity’ to fix rift with EU

In order to better investigate the assets that Russian oligarchs are keeping in Switzerland, Social Democrats are calling for a creation of a special task force consisting of representatives of the Federal Department of Finance, the Federal Financial Market Supervisory Authority, the Federal Public Prosecutor’s Office, and the Money Laundering Reporting Office.

“This is the only way to prevent, at least partially, the continued financing of the war from Switzerland”, the party said.

The party is also urging the review of residence permits granted to wealthy Russians, in particular special authorisations given to rich people without gainful activity in Switzerland.

READ MORE: Golden visas: Everything you need to know about ‘buying’ Swiss residency